The Turkish lira has collapsed, and inflation in Turkey has reached an unprecedented level: everything is becoming more expensive 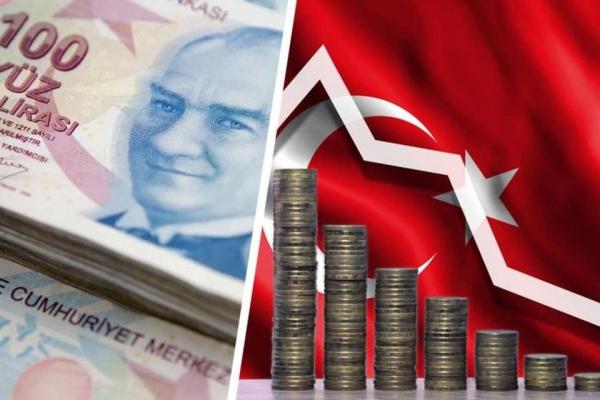 The Turkish lira collapsed, hitting a new low: its value fell to 15 lira per dollar after the Turkish inflation rate for April became known, which reached an unprecedented level of 69.97%, reaching the highest level in two decades. As a result, on Monday the Turkish currency traded for 15.0421 per dollar, the Ahval newspaper writes. At the same time, since mid-March, the Turkish currency has been estimated in the range between 14.5 and 14.9 dollars per dollar.

“Financial institutions have sold tens of billions of dollars for lira since December, when the currency crisis reached its peak and threatened to undermine economic stability. I think we are seeing strong intervention again to defend level 15 – idiotic given the broader strength of the dollar. A waste of reserves that Turkey does not have,” Tim Ash, Senior Emerging Markets Strategist at BlueBay Asset Management in London, commented to the publication.

Experts also note that the lira lost 44 percent of its value in 2021, which helped push inflation to its fastest pace since the banking crisis in the early 2000s. Losses this year are more than 10%. Inflation in Turkey will remain at the level of 65 to 75% until December – they also say.

At the same time, representatives of the opposition publication say that almost three-quarters of the Turks do not believe in the accuracy of official inflation data. “Last year, the Turks massively bought dollars and euros. And now everything is going up in price. According to some independent estimates of prices in Turkey, the annual changes exceed 100%,” they assure.

Indeed, everything in Turkey is rapidly becoming more expensive. “Everything is growing in Turkey: the number of tourists, and inflation, and prices, and the percentage of people who want to leave here,” such an observation was published on the Russian woman’s channel in Yandex.Zen. Thus, relative to last year's prices, the cost increased in all areas of life: housing (61.14%), catering and hotels (69.26%), household items (77.64%), food and non-alcoholic drinks (89.1%), transport (105.86%).

Moreover, according to experts, the current increase will not stop in the near future. It is expected to increase prices for “milk” by 33% and bread. The reason is the rise in prices for raw materials. The cost of mobile communication is increasing. “I can say according to my personal tariff with the Turkcell operator – a package for 12 GB of Internet (plus minutes and SMS) last month cost 55 liras (250 rubles), and tomorrow I will pay 70 liras (320 rubles) for it,” she specified author.

“In Turkey, they recalculated the hunger line and the poverty line for one month for a family of four: mom, dad and two children. The hunger level is set at 5.323 lira, i.e. 24 rubles (balanced healthy diet), and the poverty line is 17.340 liras, i.e. 78 rubles (the total amount of expenses for food and clothing, housing, transport, education, health care and other essentials),” the Russian woman gave an example.

It is curious that while the Russians are emigrating en masse to Turkey, the Turks themselves are in a hurry to leave it. “Turkey is a wonderful country in terms of recreation, but its citizens tend to leave it,” the author said based on statistical data.

According to official information, the percentage of young people in the republic who want to leave Turkey has increased from 28% to 48% over the past 12 years. The growth was 71.4%. “And if we take statistics on the population as a whole, then more than 35% would like to migrate abroad, if they had such an opportunity. Previously, the reason for this desire was given as the presence of a perspective offered by other countries. And now people want to get away from the hopelessness of life in Turkey,” the blogger said.

Educated people and professionals are fleeing Turkey. “They run away from feelings of hopelessness, restrictions on freedoms. Many do not see themselves in the future of Turkey, they do not see the opportunity to realize their skills, needs and hopes,” the Russian woman clarified the reasons.

For those who care about a healthy lifestyle, we recommend reading: “Scientists have established how reduce the formation of hydrogen sulfide in the intestines.