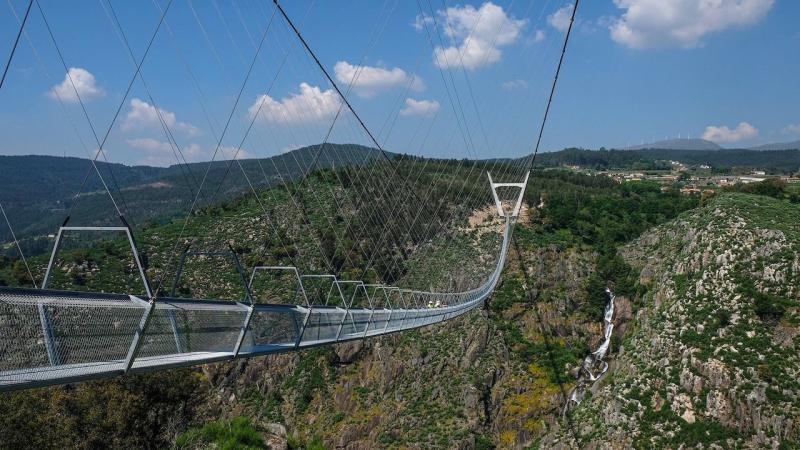 If the longest bridge in the world (165 km long) started at Moscow's Kievsky railway station, it would be possible to get to the center of Kaluga. And what other gigantic bridge structures have mankind built? We will talk about this below.

In China alone, there are two dozen bridges, the length of which exceeds 20 km. If you compile the Top 10 longest bridges in the world, based only on the length, almost all places in it will be occupied by Chinese structures.

However, tourweek readers travel not only to the Celestial Empire, so the rating includes bridges built in other regions. They are inferior to many Chinese giants, but they are the longest in their class. All these constructions are worthy of a visit, because their unusual beauty and scale are truly amazing!

Arouca Bridge is laid over the gorge of the Paiva River, which flows in the north of Portugal. The construction was completed quite recently (in April 2021) and immediately got into the Guinness Book of Records as the longest bridge for pedestrians. Its length is 516 m, and a 176-meter abyss extends under the flooring.

Architects claim that the passage was designed according to the canons of the ancient Incas. Many tourists confess to fear when traveling through Aruoka, as the structure sways a lot. It takes 10 minutes to cross the bridge on foot, after which the daredevils enter a unique geological park.

The Aruoka Bridge was built specifically for tourists visiting the Arouca Geopark, which has rock outcrops from the time of the Pangea supercontinent.

Maanshan Bridge, opened at the end of 2013, became the longest suspension bridge in the world. It crosses the widest and deepest river in China – the Yangtze, and two of its channels at once. That is why Ma'anshan is divided into two structurally different parts.

Six pylons serve as supports for the flooring, a six-lane freeway and a high-speed railway line are laid across the bridge. These highways connect two major eastern Chinese metropolises, Shanghai and Hefei, along the shortest path. Despite the fact that the crossing was built for purely utilitarian purposes, it turned out to be unusually beautiful, like all grandiose structures.

The highest supporting tower of the Ma'anshan Bridge is 345 m high.

The idea to connect Taman and Crimea with a bridge came from the son of Prince Vladimir the Great, Gleb, back in 1046. Then Emperor Nicholas II dreamed about it (but the First World War prevented it), and under Stalin they even erected a wooden crossing, which was washed away by ice drift. The construction of the modern Crimean bridge was completed in 2020

According to the designers, it is so strong that it can even survive Armageddon. This is easy to believe if you know that the foundation of the structure is 7000 reinforced concrete piles driven into the ground for 90 m! The bridge has a four-lane road and a two-track railway line. 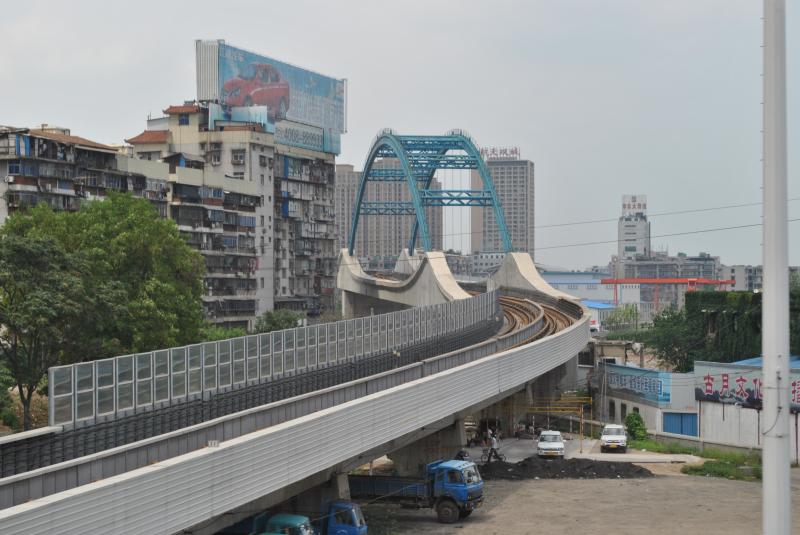 Wuhan Metro Bridge is the world's longest underground metro line. To do this, engineers built a unique viaduct that crosses the entire 12-million-strong Wuhan from west to east. The first stage of the branch started operating in 2004 – at that time its length did not even reach 10 km.

Over the next 13 years, Chinese engineers added almost 28 km to the Wuhan flyover, after which it entered in the Guinness Book of Records as the longest subway viaduct. The line has 32 stations, two depots and five crossings to other lines of the Wuhan subway.

6. Pontchartrain (USA): the longest bridge in the Western Hemisphere – 38.4 km 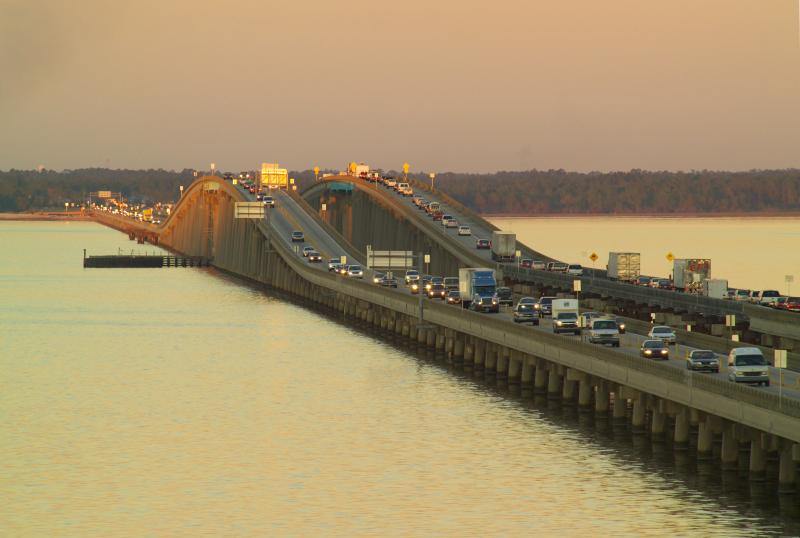 Lake Pontchartrain Causeway is the world's greatest causeway bridge, completed in 1969. It connects Louisiana's largest city, New Orleans, directly to the mainland across Lake Pontchartrain. For its construction, 9000 concrete piles were driven into the bottom of the reservoir, which was considered excessive by the standards of the 60s.

However, the reinsurance paid off completely. Over the 60 years of the bridge's existence, not a single hurricane (and typhoons for southern Louisiana are a common thing) could not cause the slightest damage to the Cyclopean structure. There is always heavy traffic on the bridge, the fare is $ 3 per car.

The Porchartrain Bridge consists of two branches, along which cars move in an endless stream. 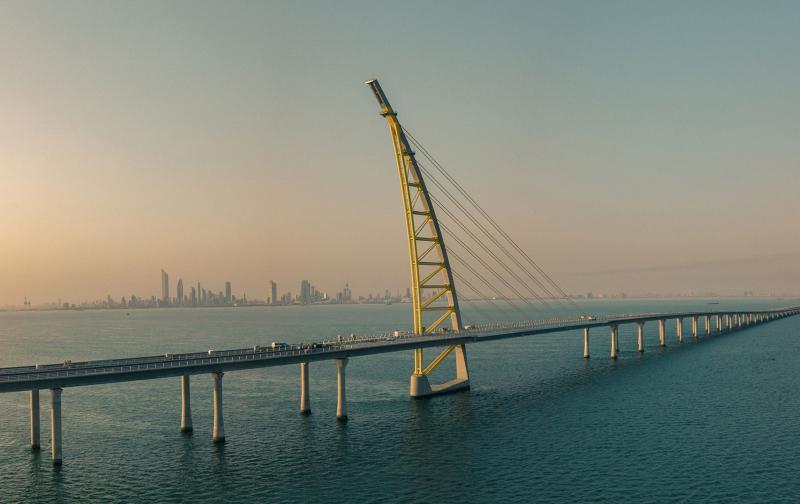 The Sheikh Jaber Al-Ahmad Al-Sabah Causeway opened in 2019. It crosses the Kuwait Bay, connecting the capital of Kuwait with the northern part of the country. The construction of the viaduct was carried out by the construction division of Hyundai Corporation. To do this, two artificial islands (North and South) had to be poured in the bay, and for the passage of ships, a suspension bridge 340 m long had to be built.

To the north, a grandiose bridge runs into the desert, but that's for now, the Kuwaiti authorities hope. According to their plan, a new metropolis of Es-Sabiya should grow from scratch here, which will crown the highest skyscraper in the world, Burj Mubarak al-Kabir, with 1001 floors.

The Jaber Bridge is purely automobile: it has 6 lanes and one emergency road. 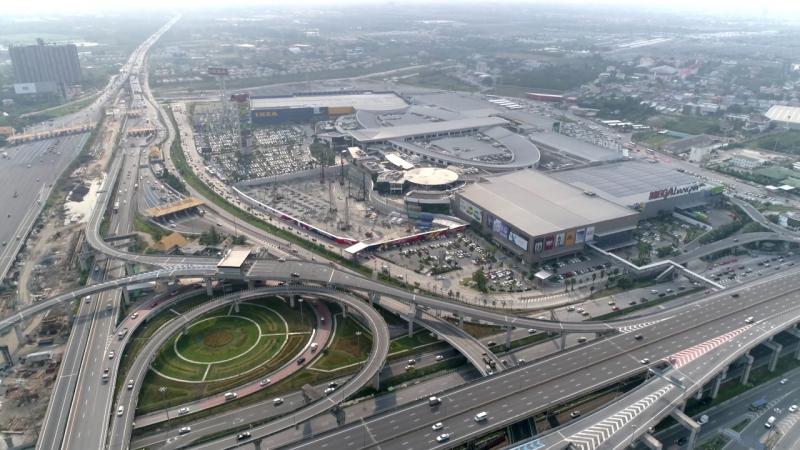 The elevated Bang Na Expressway was launched in 2000 as the “second floor” of Bangkok's Highway 34. The latter was so busy that it was almost always stuck in traffic jams. Despite the fact that Bang Na is a toll highway (25-50 baht from 4 wheels), it is very popular, because. provides high-speed movement in the Thai capital. It houses a six-lane highway, the elevation of the highway above the ground reaches 18 m. Thais are proud of their superbridge, and almost all tourists involuntarily get acquainted with it, since Bang Na is the most convenient way to get from the airport to the center of Bangkok.

Interchanges of the Bang Na Expressway are as grandiose as the best Chinese counterparts. 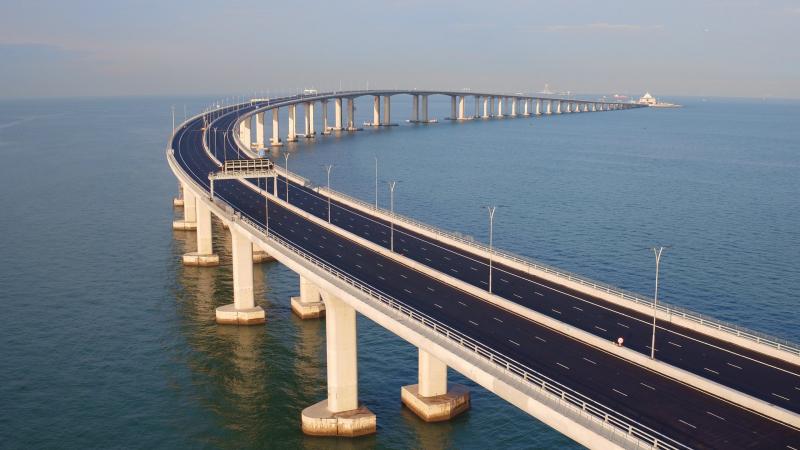 The Hong Kong – Zhuhai – Macau Bridge crosses the Pearl River Delta. It connects in a straight line the two largest southern Chinese metropolises: Hong Kong and Macau. About 23 km of the crossing passes over the sea – in this place it looks especially impressive. To build a huge structure, the builders had to pour two artificial islands and break through an underwater tunnel about 7 km long. In total, $20 billion was spent on the move. However, all the efforts and money – more than paid off. After the opening of the bridge in 2018, the driving time from Hong Kong to Macau has been reduced from 3 hours to 30 minutes.

The bridge is purely car-only, with six lanes of traffic. 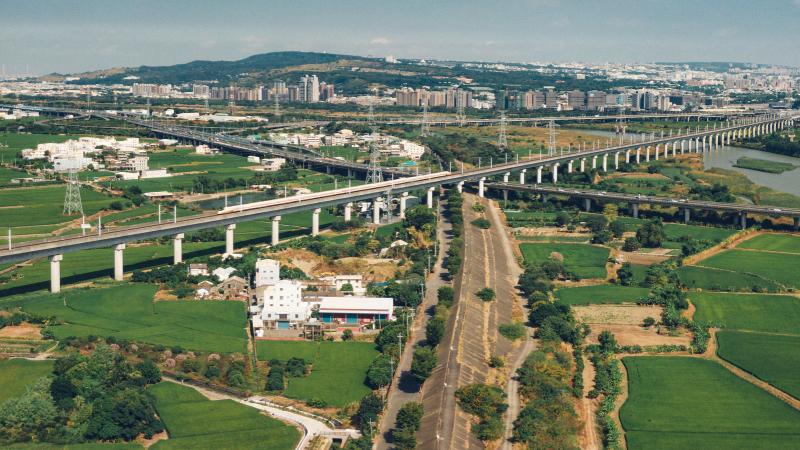 Changhua – Kaohsiung Viaduct is in the category of planetary scale structures: it is perfectly visible to astronauts working on the ISS. The viaduct serves as an overpass for trains moving at speeds up to 300 km/h, it was put into operation in 2007. Every year, a fantastic number of passengers pass through the overpass – more than 200 million

The design feature is a huge seismic resistance. In 2016, the bridge successfully survived the 6.4 magnitude Kaohsiung earthquake with virtually no damage. This is not surprising, because the construction of the viaduct used two-meter piles driven to a depth of 60 m.

The average elevation of the Taiwanese megaviaduct above the ground is 28 m. 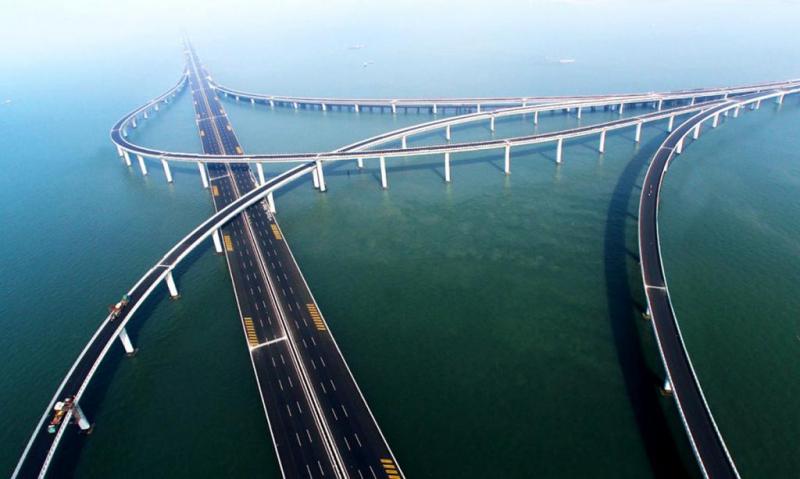 In terms of its scale, the Danyang-Kunshan Grand Bridge is a relative of the Great Wall of China. The main purpose of the cyclopean structure is to pass high-speed trains from Shanghai to Beijing. However, in some places, sections of an ordinary highway were laid on the viaduct.

It is interesting that such a large-scale overpass was built in record time, in just 2.5 years (2008-2011). 5 million cubic meters of concrete, 0.5 million tons of steel, and the total cost exceeded $10 billion. The architects claim that the viaduct is able to withstand an earthquake of up to 8 points and even a tsunami. If some have doubts about this, then almost everyone agrees with the epithet “a highway that was ahead of its time.” h 58 min 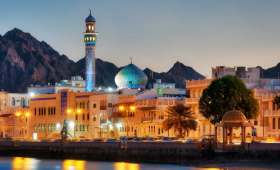