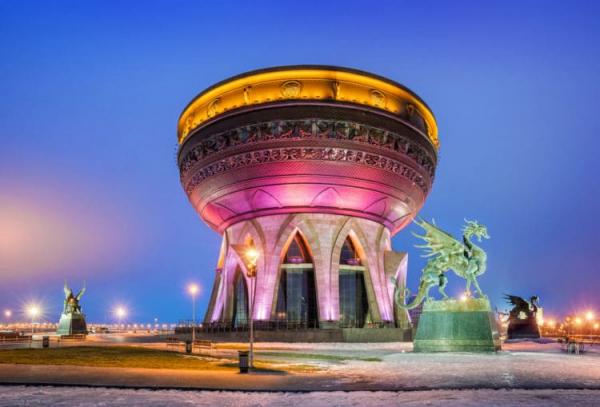 If you want to know what every tourist should see in Kazan, carefully study this review. We will give you competent recommendations and tell you about the most fascinating sights of Kazan – those without visiting which your trip to the capital of Tatarstan will be incomplete.

What to see in Kazan in the first place

When compiling our rating, we took into account not only our own opinion, but also the reviews of experienced tourists. The most popular excursions in Kazan are: 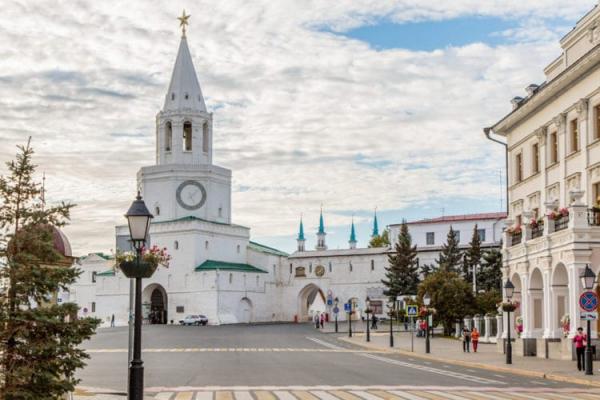 Even if you come to the city for one day, dedicate them to a trip to the Kremlin (the official residence of the head of Tatarstan). The date of construction of the historical object is the 10th century. The territory, in fact, is a complex of archaeological and architectural values: cultural buildings, temples, the white-stone Kremlin, the third, second and first settlements. The Kremlin is always included in the list of what to see in Kazan in 1 day.

Kul-Sharif Mosque on the territory of the Kazan Kremlin

A delightful building with four minarets, each 58 meters high, stained glass windows and observation towers. The front part is represented by cross squares. The main decorations of the interior are carpets presented by the Iranian head, and a chic chandelier. The mosque has an Islamic museum, an office for the imam and viewing balconies for tourists.

3. Annunciation Cathedral of the Kazan Kremlin

The Cathedral and the main temple of Orthodoxy, preserved from the time of Pskov architecture. The building has a cruciform shape, a rich facade and interior. Inside are the remains of St. Guria, by whose decree the construction of the temple began. 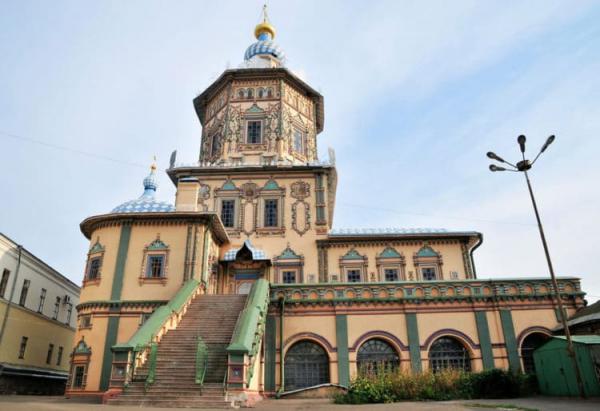 The architectural monument, in the style of “Russian Baroque”, began to be built by the arrival of Peter the Great. Key features: 7-tier iconostasis, covered with gilding, rich history and height over 50 meters.

5. Temple of All Religions 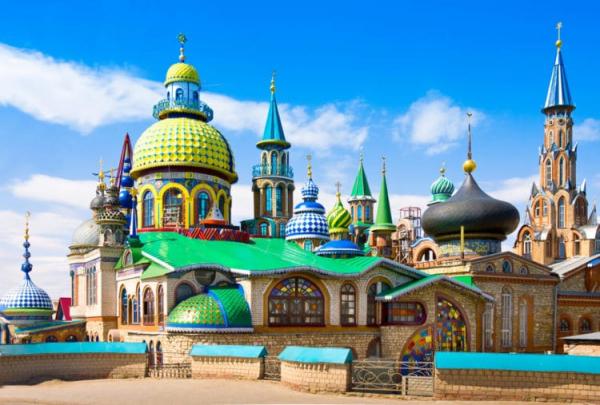 Few sights in Kazan are as extraordinary as this building. The unique building contains 16 religions (Judaism, Catholicism, Orthodoxy, etc.), including those that no longer exist. The building was built by the Khanov family, starting work in the 90s.

Watch the magnificent views of Kazan in this beautiful video !

Don't know what to visit in Kazan, but are fond of unusual architectural structures? Come see this romantic symbol of the capital. The 60-meter tower is slightly inclined towards the north-eastern part of the city, but does not fall completely (the safety of the structure is constantly monitored). According to legend, more than 5 centuries ago, the beautiful queen Syuyumbike gave the order to build it after the death of her beloved husband.

7. Belfry of the Epiphany Cathedral

Another famous symbol of Kazan, made of red brick. The Epiphany Monastery itself is located behind the bell tower with an observation deck. If you want to enjoy the panorama of the entire capital, come here. To see such the best sights of Kazan, you must first pay for the ticket. The money goes to the creation of new and restoration of old bells. 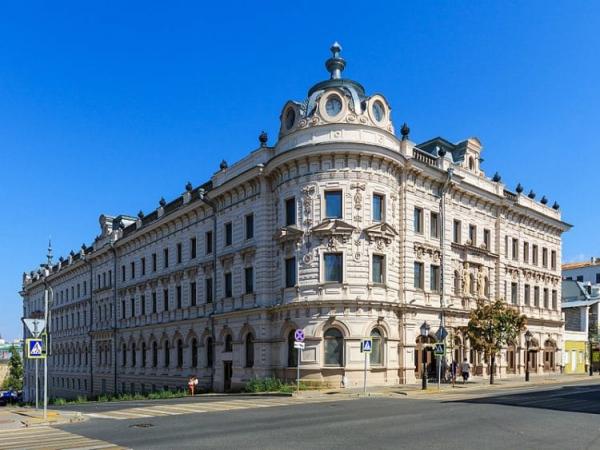 The complex of 1886, which previously included a patio, entertainment and commercial establishments. The main building is made in various architectural directions: classicism, baroque, renaissance. The exterior is richly decorated with ornamental stucco. Earlier, they wanted to equip the house with a museum, but the idea was abandoned due to financial difficulties. Now trade and administrative institutions work here. 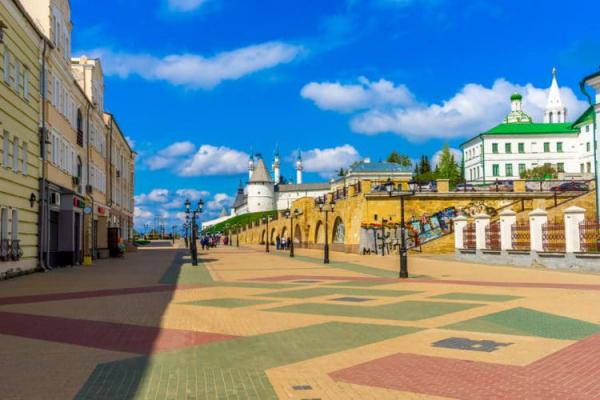 The main pedestrian street in the historical center of Kazan

Where should every tourist visit in Kazan? To the main most famous and ancient street of the capital. Numerous architectural and cultural masterpieces are located here – the Carriage of Catherine II, the monument to the Kazan Cat, the monument to Chaliapin. The modern pedestrian “Kazan Arbat” will introduce you to the Drama Theatre, Epiphany Church, beautiful monasteries. You can look at fountains and sculptural compositions, shop in the best shops of the city and eat in cafes serving national dishes and drinks. 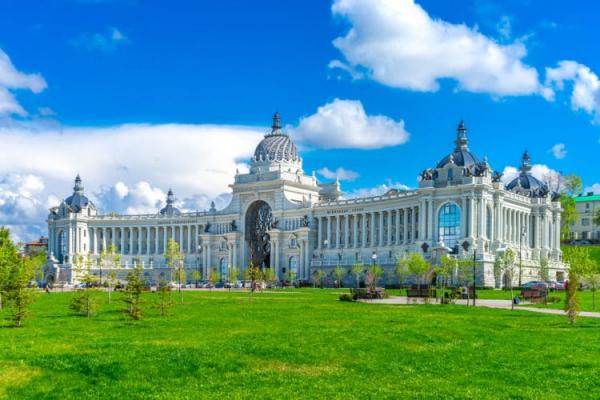 View of the Palace of Farmers from Baturina Street in Kazan

The palace in the Empire and Classicism styles became the seat of the Ministry of Agriculture. The original decoration of the building is a bronze tree resting against the arch. At night, the colorful facade of the house is illuminated by bright lights, creating fantastic light images. All guides in Kazan recommend visiting this beautiful palace. 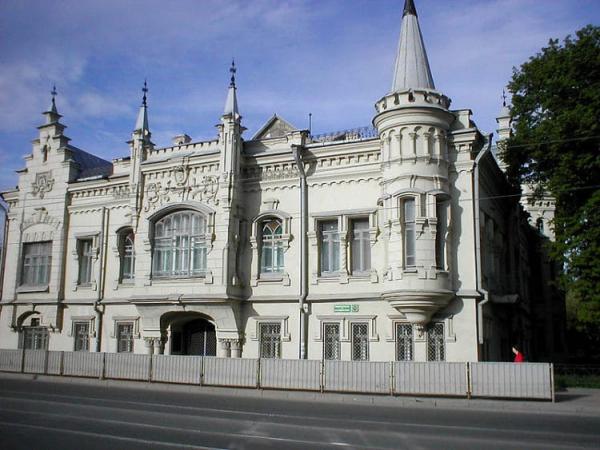 View of the facade of Shamil's house from the street. Gabdulla Tukay in Kazan Kazaneer

A beautiful landmark of the city, created by the famous architects Amlong and Rush. The front part of the building reminds of the traditions of Kazan architecture and the Middle Ages. In the 19th century, General Shamil and his entire family lived here. Later, it was decided to open a museum of G. Tukay in the house, which is still open today.

Luxurious two-story building of the early 20th century in Kazan

The building was erected at the direction of a major industrialist and merchant Ushakov, who later presented it to Zinaida, his sister. Today, the building houses the largest library in the city (and the entire Republic of Tatarstan). Of particular interest is the design of a two-story house, consisting of four combined structures: with luxurious stucco on the outer walls, a circular balcony with openwork lattices and a semicircular bay window. The interiors are just as splendid: in Chinese, Moorish and Gothic styles, as well as in the Empire style. The interior decoration is represented by wooden and bronze sculptures, French stained-glass windows depicting birds, a front “eastern” staircase, and gilded stucco decoration. Be sure to look at the grotto room, created in the form of a cave with an aquarium. Such interesting places in Kazan are worth visiting with the whole family. 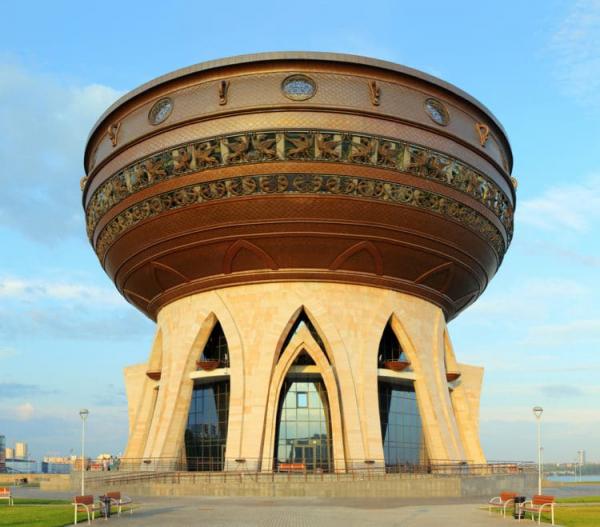 Talking about the sights of Russia, Tatarstan and Kazan, we pay great attention to ancient buildings and values. This time we are talking about a modern facility, created only 5 years ago. An architectural building with a trio of thematic zones, crowned with a giant cauldron. The interiors are made in the classical style, directions of the Khanate and Volga Bulgaria. The purpose of the building is the same as that of any Wedding Palace. On days when marriage registration is not held, guests are allowed to go up to the observation deck and inspect the interior.

14. National Museum of the Republic of Tatarstan 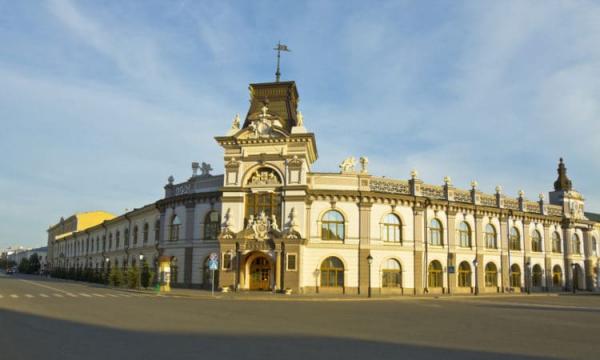 The largest museum complex of the capital, worthy of being included in any list of “the main sights of Kazan: briefly and with a photo.” Your trip to the city should start with a visit here. The expositions tell about the traditions and historical events of the Republic and its population. The eras are completely different – from modern times to historical times. Among others, there is an exhibition showing samples of the nature of Tatarstan. The original carriage of Catherine II (a highly accurate copy of this legendary vehicle is located on Bauman Street) is stored here.

Fountain “Kazan” in the Millennium Park in Kazan

The date of arrangement of the beautiful park complex is 2005. The area is divided into thematic zones. In the center is the Avenue of the Millennium. In addition to it, there is a section called “Crossroads”, showing the relationship between the cultures of Asia and Europe. Both guests of the capital and local residents like to walk and relax in the park. Often, national festivals, concerts and exhibitions are organized here. The opening was timed to the millennium anniversary of the city. The territory is maintained in a constant order, so walking around it is a pleasure at any time of the year.

Sights of Kazan: what else to visit in Kazan?

Those sights of Kazan, photos with names and descriptions of which you have just seen, are the most visited in the city. But we recommend you not to ignore such objects as:

A monumental building created in honor of the poet and national hero of the country M. Jalil, who died at the hands of the Nazis in 1944. Twice a year, residents of Kazan bring flowers to the monument and organize a mournful procession through the streets of the capital.

17. Monument to the Cat of Kazan 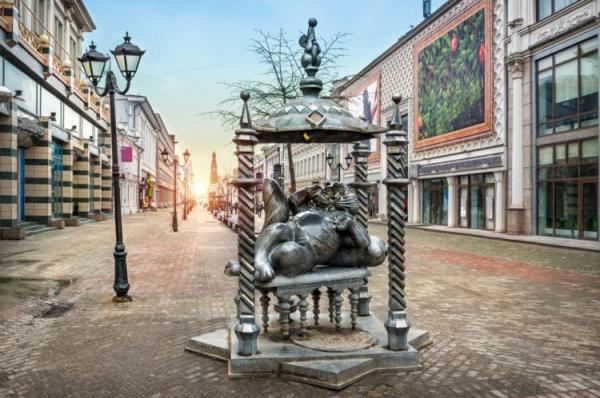 According to history, Catherine the Second ordered three dozen cats from Kazan to be brought to her chambers in St. Petersburg. She did it in order to get rid of the mice. As a reminder of this interesting event, several monuments in the form of these animals were created in the capital of Tatarstan. If you are interested in hotels in Kazan, and you are looking for them on Bauman Street, be sure to look at one of the two funny “Catherine” cats, cast in bronze.

18. Museum of Illusions and the Giant's House 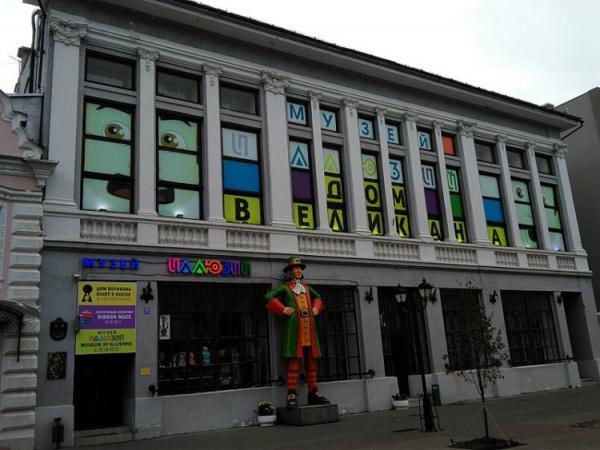 Two parts of the same entertainment complex, opened only three years ago. Attractions-exhibitions can be viewed as long as necessary. The giant's house will amaze you with its giant household items, furniture and clothes. The Museum of Illusions will allow you to take unique and funny photos in 3D without resorting to Photoshop. 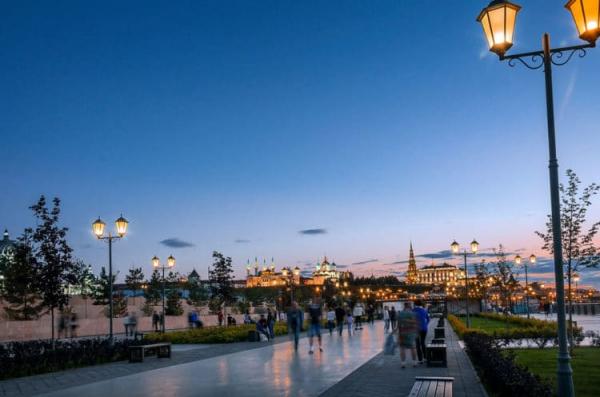 Another well-known pedestrian part of the city, which will allow you to see the Millennium Bridge, the registry office and the Kremlin. You can go to restaurants, cafes and souvenir shops. In addition, there are bicycle rentals, children's cars and roller skates. It is a great pleasure to visit the embankment in good weather. 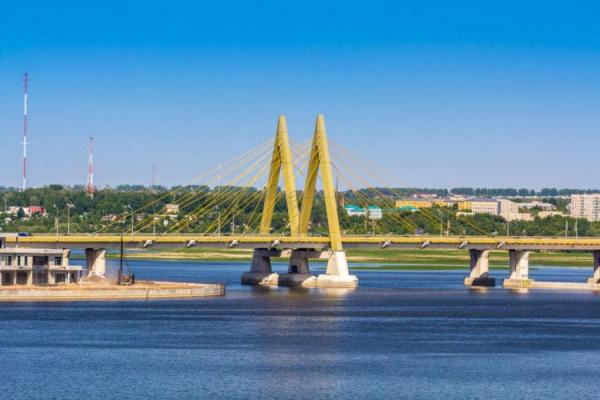 A modern high-tech structure, over 1.5 km long. The bridge rises almost 65 meters above the water level, and consists of 2 pedestrian and 6 car lanes. Construction work continued for more than two years. The foundations of the structure form the letter “M”. At night, a gorgeous backlight turns on. 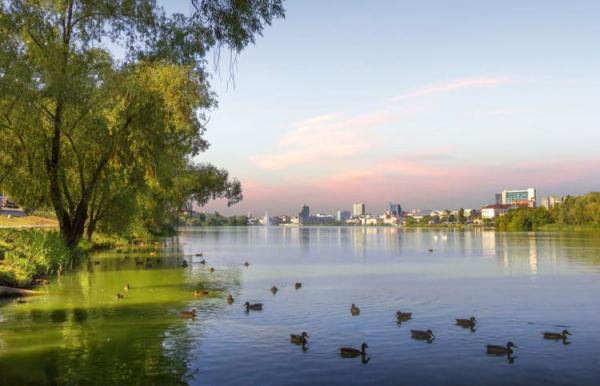 Another interesting place in the capital, which should be visited on a sunny day with the whole family. An old Tatar settlement stretched from the east of Kaban. Here you can feed blue or ducks (seeds, grains and bread are sold by locals right there). On the northern part you can see wonderful sculptures, flowering alleys and fountains (they do not work in winter). The theater named after Kamal is also open here. You should come to the lake, for example, in order to ride a pedal catamaran or a boat.

Now you know what to visit in Kazan is a must. Arriving in the hospitable capital of Tatarstan, start your sightseeing trip as soon as possible. Read also about the sights of Sochi and get inspired for your further trip around Russia.