Skip to content (Press Enter)
Home>Blog>Raspberry lake in the Altai Territory. My history 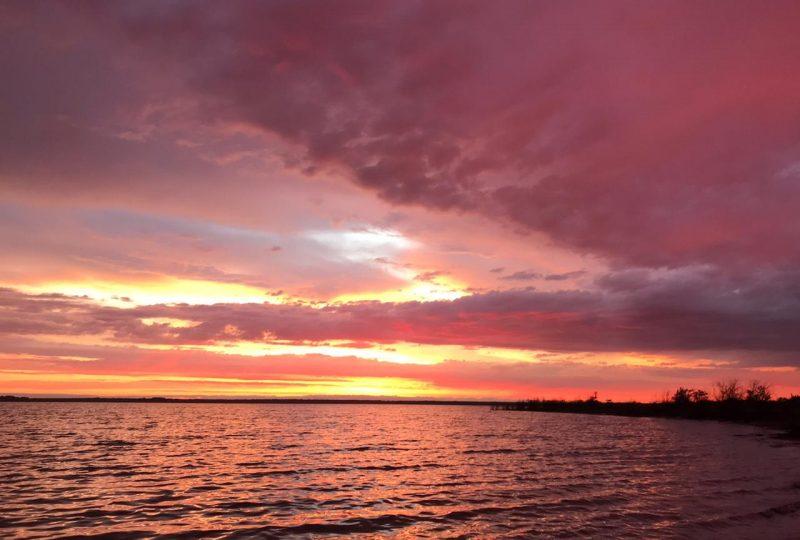 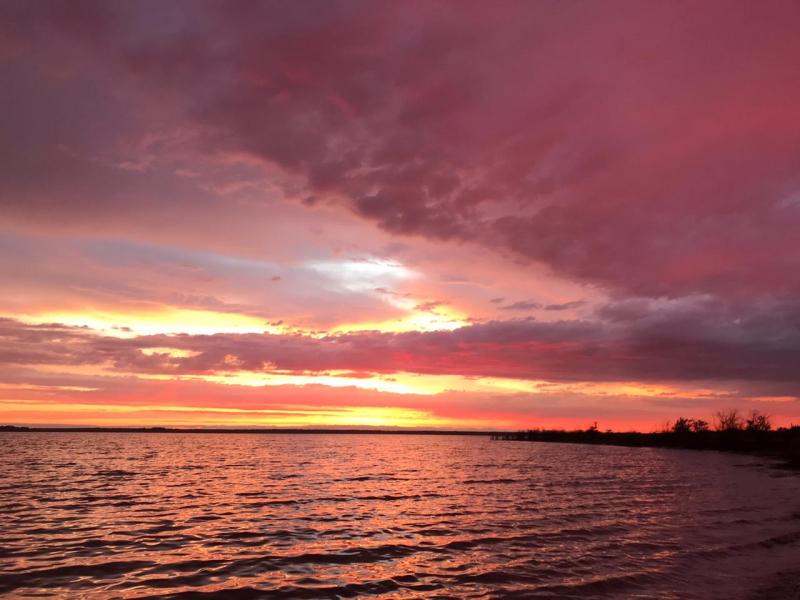 Perhaps it’s worth starting with the fact that I have long wanted to visit the wonderful lake of bright pink color, the pictures of which somehow googled from the Internet. The last 6 years have been spent in the cool mountains. This year, surprisingly, the circumstances turned out so that all plans had to be replayed and the choice of a vacation spot fell on Raspberry Lake in the Altai Territory.

Excellent! Smooth, with good coverage, but boring to Rubtsovsk. Further, about 100 km, the asphalt goes into the fields and, in some places, into a wonderful pine forest.

It's next to Printed, also pink with lots of healing mud 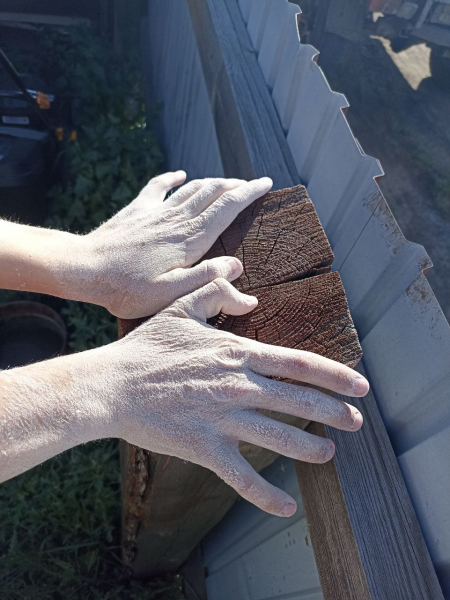 The first thing we saw was Printed Lake. Still weak, but already pink))) Emotions are difficult to convey. For the first time in my life I saw rose water live.

Like in a good girl's fairy tale))) Printed Lake is located at the entrance (km 4-6) to Raspberry Lake and the village of the same name. Amazing lake! We reached it more than once during the rest. Fine, very warm, and somehow velvety because of the salt. The bottom of the lake is layers of salt, but not prickly, but also velvet) Everything that enters Printed Lake is sealed with salt. 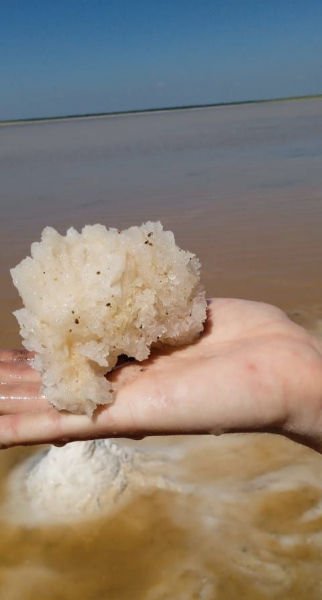 At the bottom of the lake, in addition to salt, there are also dark patches of mud. In general, why Printed Lake, we made several assumptions at once. Perhaps because of its round shape, or maybe because from a height it looks like it has dark seals. 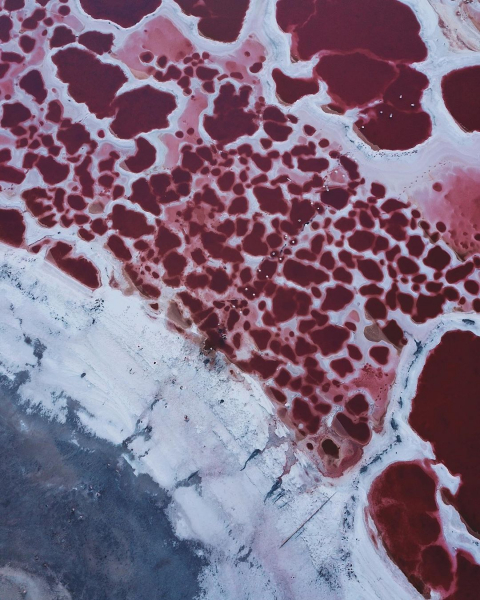 From Wikipedia: “drainageless, bitter-salty. It belongs to the group of Borovoye lakes.  The lake is unique in the color of the water of a raspberry hue, a distinct pink-raspberry tint to the water is given by the bacterium Serratia salinaria that lives in the lake “.

About three years ago, the lake was diluted by a fresh river. It has somewhat lost its properties, therefore it is now turning pink by the end of July – the beginning of August. We arrived on July 11th. And of course, we saw such a lake.

And this is how it will be in a month, when the concentration of crimson-pink pigment (which is produced by local algae) will be sufficient. 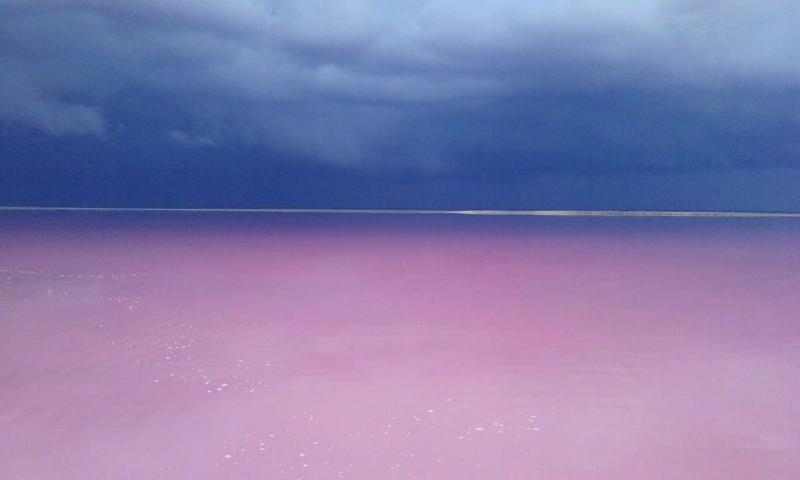 But at the same time, it has not lost its medicinal properties. At least that's how it seemed to me. I plucked everything that can be plucked from salt water. It seems even the internal organs. On the 3rd day of my stay and daily bathing, I was relaxed – from stress, problems, nerves, study, work – in general, everything. A woman who has been coming here for 8 years said it was from the salt. 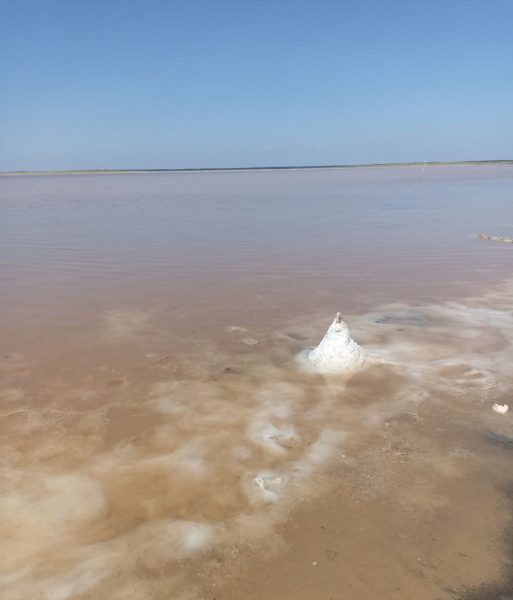 A lot of salt along the banks

< p>By the way, in 2013, Raspberry Lake was included in the route “The Big Tourist Golden Ring of the Altai Territory”. There is a tourist base on the shore of the lake. 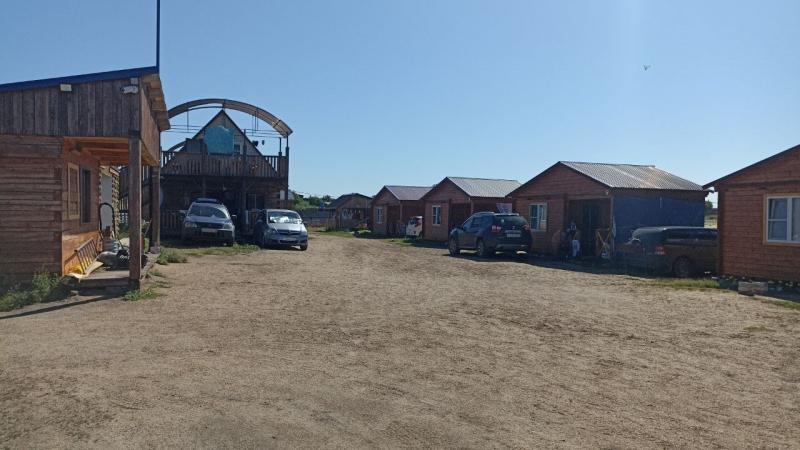 Small, cozy, quiet and peaceful base “Salt Coast” with a very friendly management (Artem, hello!).&nbsp ; There is everything from a place for a tent, a gazebo and a swing on the shore to a refrigerator, stove and dishes in the kitchen.

Wooden houses, with a veranda for evening (and not only) outdoor gatherings. 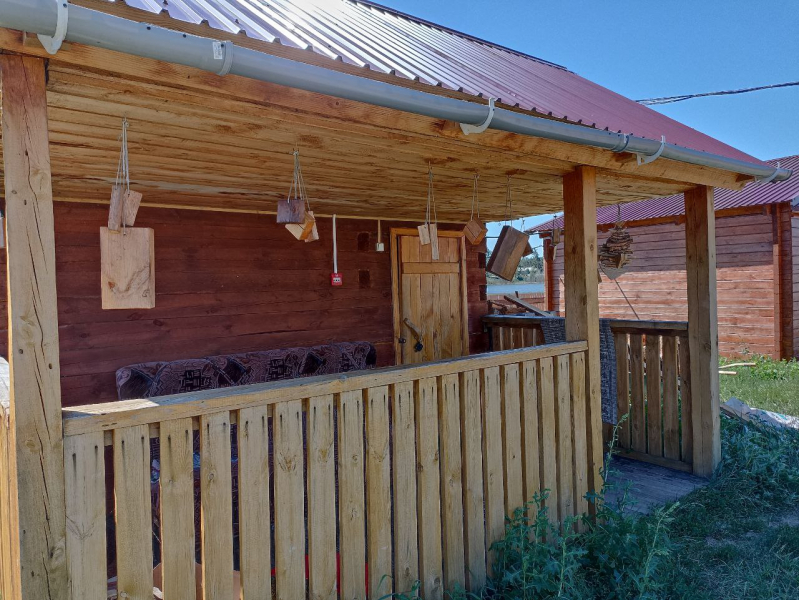 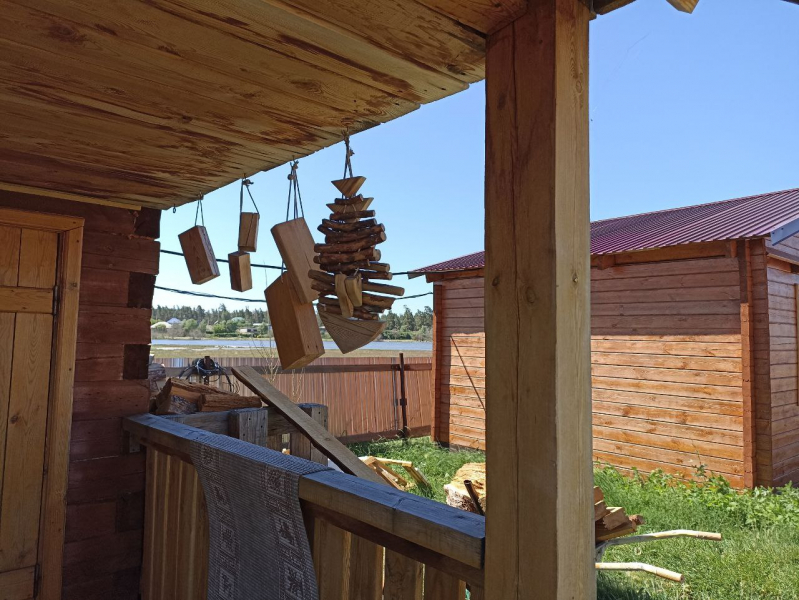 I still didn't dare to ask before leaving if animals are allowed. I was afraid that they would refuse. As a result, we arrived with dogs. And it was absolutely normal for the owner of the base. 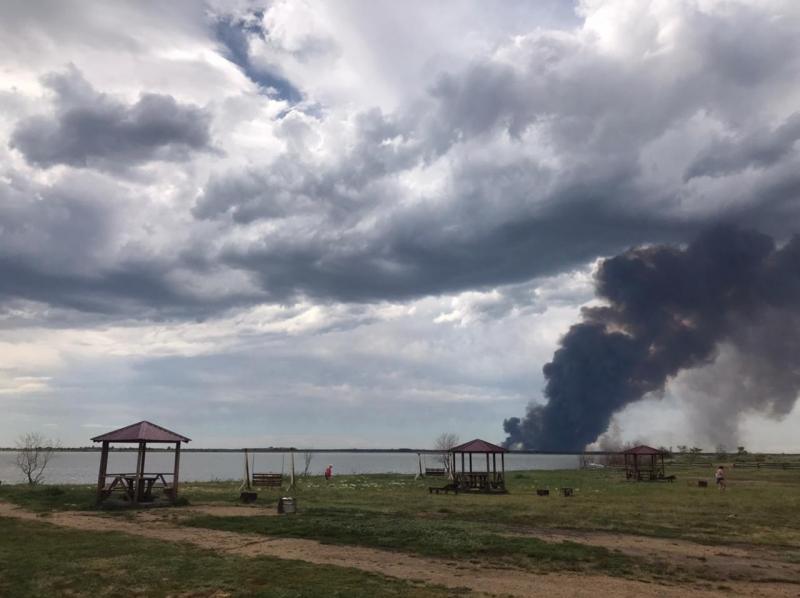 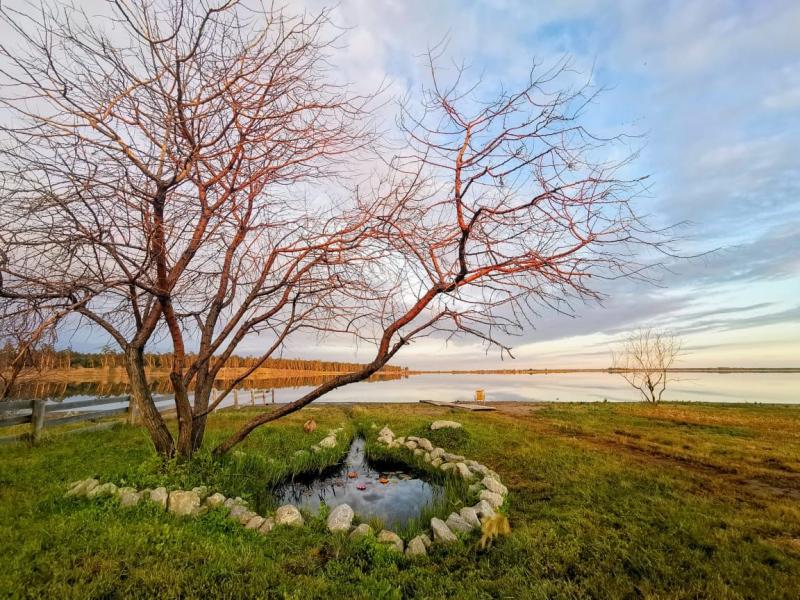 And even a pond where fish live 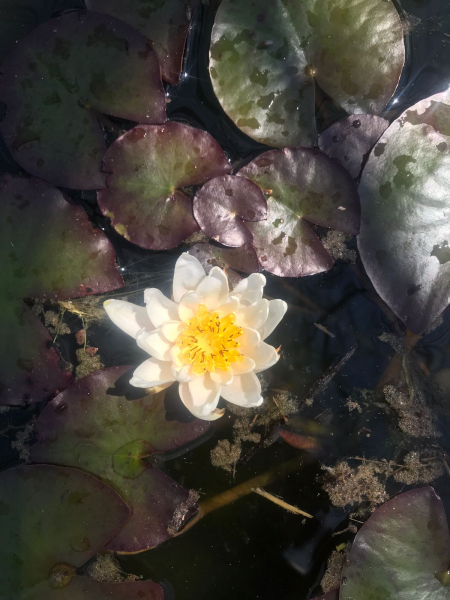 The once large and developed village is now, unfortunately, quietly dying. And this is sad. There is one city-forming enterprise on the territory. The village is quiet, there are shops, pharmacies, a school, a hospital. We asked the locals where the center of the village was. Found. Behind the club there is a huge but abandoned stadium (I did not take a photo). It can be seen that once it was a developed village. Met and interacted with people in the village. They say that Raspberry Lake used to be a good place to live – cozy, calm, with distinctive recreational opportunities. After the collapse of the USSR (like many other settlements), it began to die out. The population has dwindled, the infrastructure has gone (including a large hospital). I really want it to return to its former prosperity one day…

We met guys from Chita, Kemerovo, Barnaul, Novosibirsk. Everyone turned out to be positive, with their own stories about why they ended up here on Raspberry Lake. Someone came to receive medical treatment, and has been doing this for more than a year. Someone came for the first time, like me, having found beautiful pictures on the Internet. There was only one thing – we all went to rest on this lake 🙂 krae-moja-istorija-f4bf454.jpg” alt=”Raspberry lake in the Altai Territory. My story” />

I don’t know about the lake, but the sunsets there are raspberry))))

P.S. After a bit of research, I found another raspberry lake in the Altai Territory. Bursol. But that will be another story, I think))) 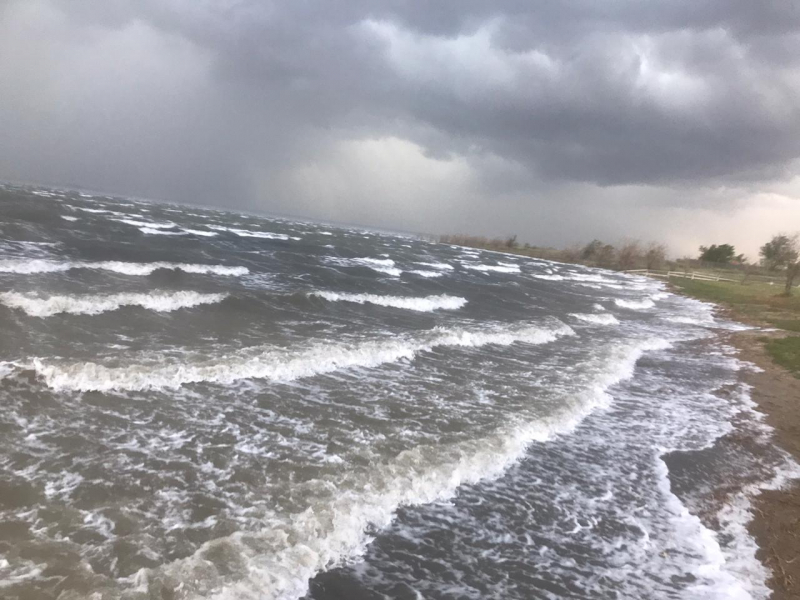 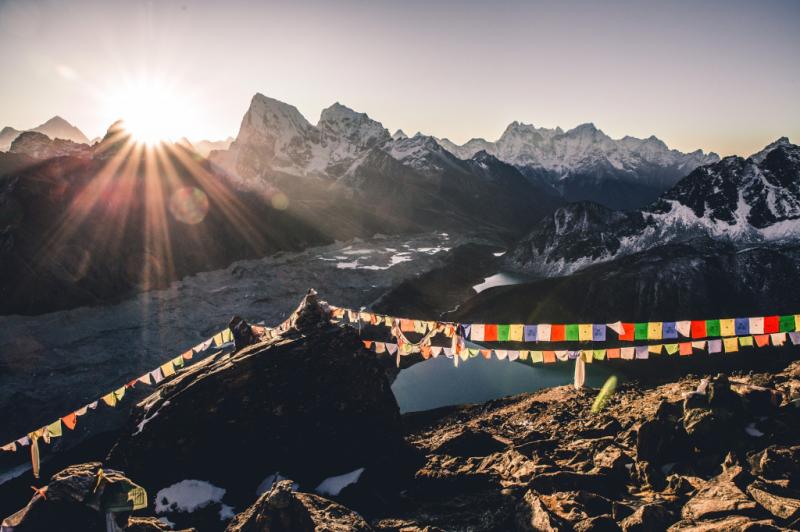 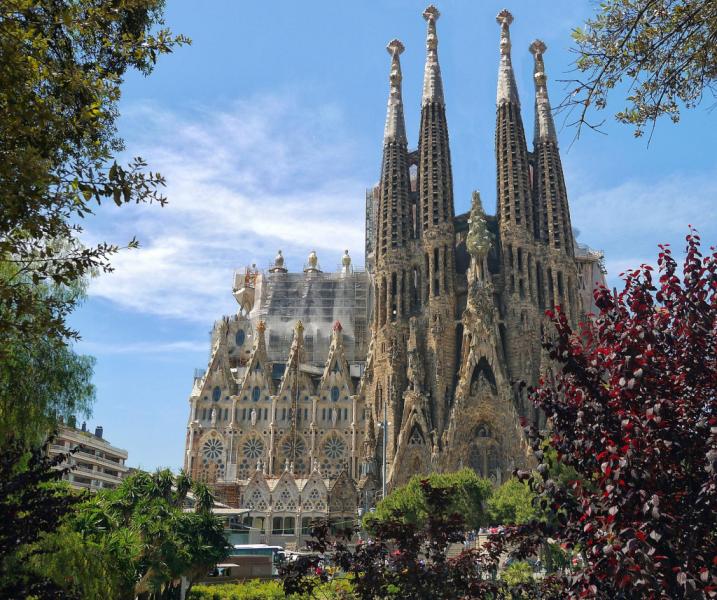 TOP 30 famous places in Barcelona: what to see in the capital of Spain

What to see in New Orleans? TOP 25 best attractions