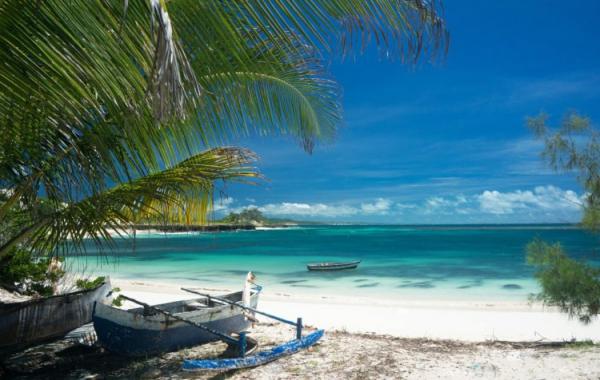 Madagascar is an island state, similar to a large nature reserve. Each new guest of the country finds something to see in Madagascar: active holidays on the sea coast are complemented by ecotourism in protected areas, and guides in Madagascar help organize any kind of recreation – they conduct numerous excursions to the sights of Madagascar with accommodation in comfortable hotels in Madagascar. Excursions in Madagascar are a huge network of routes around the country that are almost impossible to cover at one time, but you can always choose the most important sights that form the most complete and vivid impression of this country. The recommendations given in this article will help you solve the problem of choice.

What to see in Madagascar in the first place

This review will allow you to plan your future route so that you can easily determine what to see in Madagascar in 1 day, a week and any other period of time, depending on the possibilities. The best attractions – cities, buildings and protected areas, of which there are a lot, will make the trip to Madagascar rich and memorable.

Sunset over the “city thousands of warriors”

You will definitely find where to go in Madagascar if you visit its capital – the city of Antananarivo. This is a real gem in a beautiful necklace of cities in the country. While walking along the streets of the capital, it may even seem that you are in the heart of France – the Hotel of France is located in the center of the city, signs “Made in France” flicker everywhere, all this is complemented by the inviting smell of fresh croissants in the air and the sounds of the accordion. There is something to see in Madagascar and from the natural attractions of the capital. Just a few kilometers from Antananarivo there is a reserve with rare species of animals, and Lake Anusi, located in the very center of the capital and surrounded by a beautiful park, surprises with an unusually beautiful, lilac color of its waters. 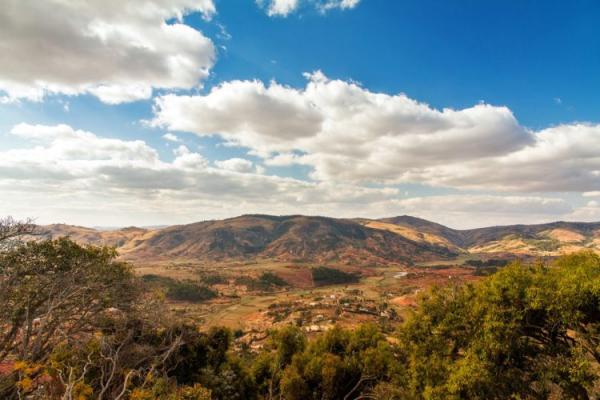 View of the royal hill of Ambohimanga

This is one of the most important attractions in Madagascar dedicated to the Malagasy culture. King's Hill is the ancient ruins of a once prosperous city. In addition to the royal city itself, ancient shrines and burials are located here. It is assumed that sacred rituals were also held here. The hill was arranged in such a way that a forest grew on its top, where peace and tranquility reigned, and on the lower tiers there were cut areas intended for agriculture. The city was surrounded by walls with 14 stone gates, and moats were dug around the perimeter for additional protection. 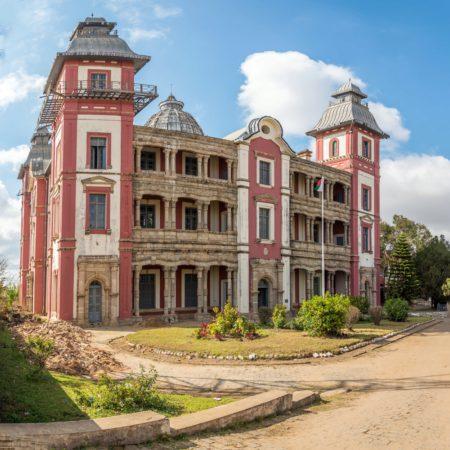 The former residence of the Prime Minister of the country Rainilayarivuni

Now in more detail what to see in Madagascar on the aforementioned hill. First of all, it is Andafiavaratra Palace. At one time, it served as the residence of the prime minister who ruled the kingdom in the 19th century. Now the palace is equipped as a museum, which presents about one and a half thousand exhibits, including antique furniture, portraits of rulers, royal jewelry and outfits. These and other exhibits are of great historical value for the state. Many of them were restored after a major fire and were moved here from Ruva Palace, which will be discussed later. 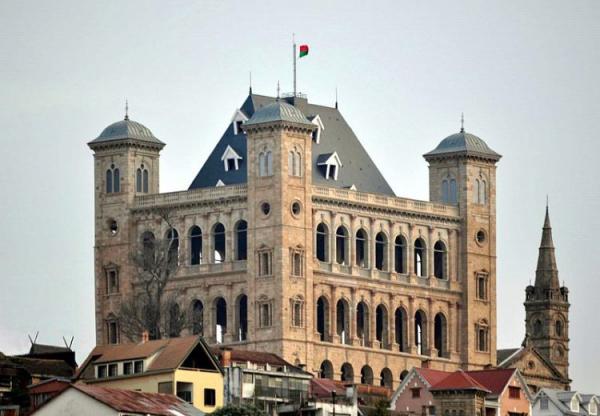 The palace is located on Mount Analamanga, at an altitude of about 1.5 kilometers above sea level. It was built of wood and stone in the 19th century in honor of the first queen, Ranavaluna, who ruled the state in the 17th century. In 1995, as already mentioned, a fire broke out near the Ruva Palace, right in the process of demonstration, which destroyed almost all the wooden structures of the structure. To date, the palace has been completely restored, and this attraction has regained its former glory. 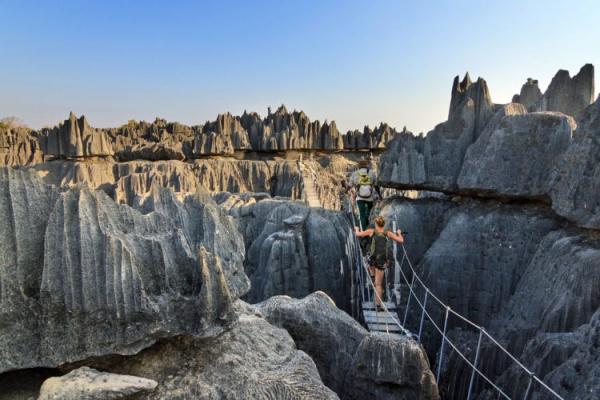 Some natural objects are so beautiful that you should definitely look at them in Madagascar, including them in your travel itinerary. One of these sites is Tsingzhi du Bemaraha, the largest nature reserve with an area of ​​1,500 square meters. km, consisting of huge limestone ridges and impenetrable labyrinths. The purpose of the organization of the reserve was to protect karst landscapes and rare species of lemurs. Looking down from the tops of the limestone cliffs, one can observe extraordinary views that are difficult to describe: the stone jungle alternates with deep canyons and gorges, caves and the dark waters of the Monambolo River. The harsh landscape is diluted only by carefree lemurs, who easily move through the most impenetrable labyrinths.

Be sure to watch this beautiful video about Madagascar! 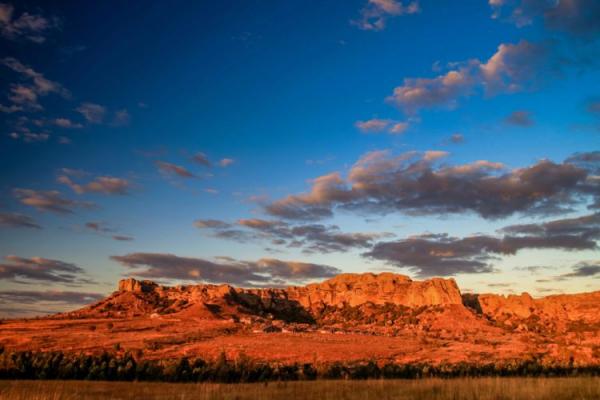 The natural landscapes of Izalo were once recognized as valuable and unusual, which is why it was decided to create a reserve here. Local landscapes are very reminiscent of the views of the desert African savannah. However, there are also some very beautiful eco-routes along the riverbeds. Isalo was founded in 1962 on a territory with an area of ​​about 800 sq. km, and the height difference ranges from 500 to 1200 meters above the sea. Bizarre rocks, deep caves and canyons add beauty to the local landscape.

A corner of nature in the Atsinanana rainforest Frank Vassen

This attraction of Madagascar is a relic forest that stretches along the east coast of the island. This zone, which was formed about 60 million years ago, remained geographically isolated throughout its existence, which led to a high degree of endemism – for many millennia, evolution went on its own here. For example, about 12 thousand species of vegetation growing here are endemic, as well as 78 species of mammals living here. 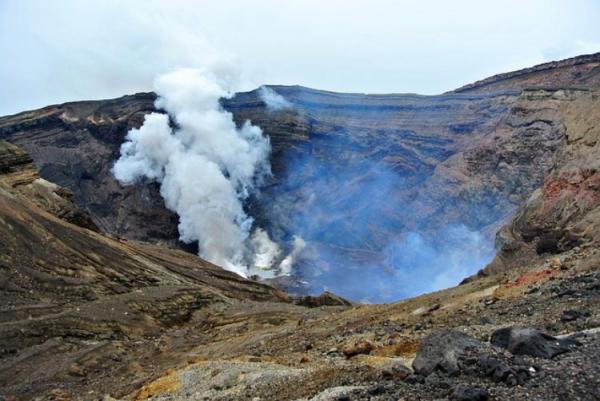 Just 50 kilometers from the capital is a unique attraction of Madagascar – a ridge of extinct volcanoes, which covers an area of ​​​​about 100 square kilometers. Volcanoes went out already about 2 thousand years ago, but sometimes they “wake up” for a short time, making themselves felt by small earthquakes and the formation of new hot springs. The highest volcano is Ankaratra, its height is more than 2.5 thousand meters. Rising to a height, you can observe the extraordinary panorama formed by dormant volcanoes. Numerous tourists are attracted here by the abundance of springs of healing water that gush out of the ground right on the streets of the town of Antsirabe, located at the foot. 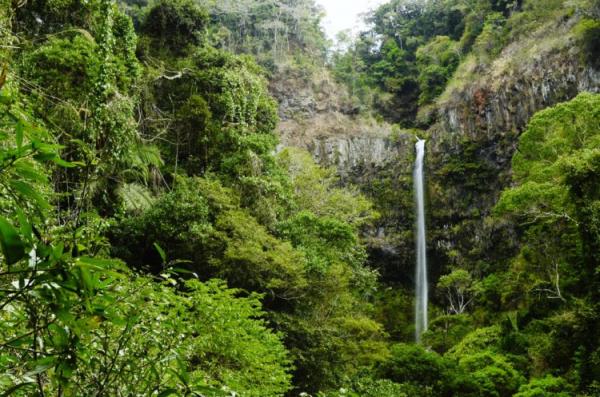 The picturesque waterfall of the Montagne d'Ambre National Park

This attraction of Madagascar is located on an area of ​​23 thousand hectares right on the slopes of an extinct volcano. Tropical forests grow in the park, the territory is saturated with moisture – there are many lakes, beautiful waterfalls and rivers. The local population greatly reveres this place as sacred, shrouded in many beliefs and legends. This protected area has become home to many endemic animals and plants, including 7 species of lemurs, 77 species of birds and 24 species of amphibians.

Sights of Madagascar: what else to visit in Madagascar

Reviews about excursions to Madagascar point to the possibility of combining a relaxed holiday on the cleanest beaches and difficult exciting journeys through numerous volcanoes, deserts, islands and coral reefs. The rating of other attractions in Madagascar is for those who wish to get to know these lands as best as possible. 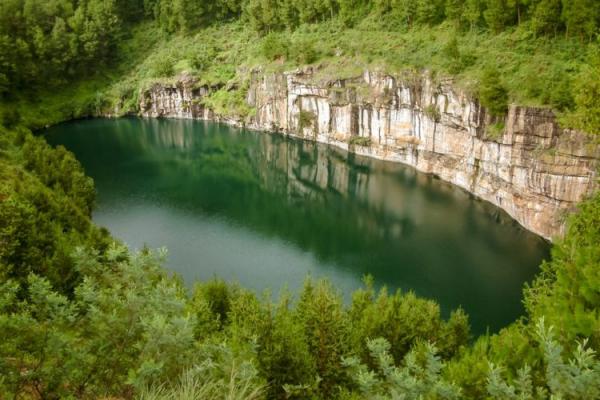 Sacred Lake Tritriva in the mouth of an extinct volcano

The lake has a volcanic nature – it is located right in the crater of an extinct volcano, and its depth reaches 150 meters. The amazingly beautiful turquoise color of the lake attracts many visitors here, as well as the legend that exists about this reservoir. According to her, local lovers – Ibenyombi and Ravolahanta, who were not allowed to be together, once rushed into the waters of the lake.

This reservoir has another phenomenon – during the drought period, the water level in it rises, while during the rainy season, on the contrary, it drops. And the objects that are thrown into the lake eventually appear below, in the valley, so there is an assumption about the existence of underground channels. The lake is so unique in its features that everyone should visit it in Madagascar. 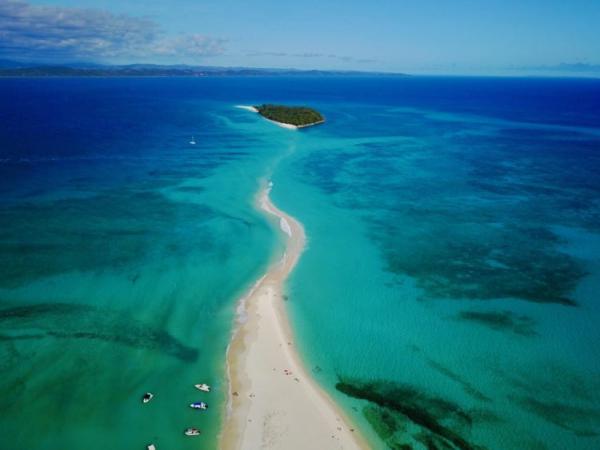 There is something to see in Madagascar among other natural monuments of volcanic origin. Such is the island of Nosy Be with magnificent nature – the cleanest sandy beaches, rich in flora and fauna. This is the perfect place for a quiet and relaxing holiday by the sea. The island is a plateau of volcanic nature, which rises above sea waters to a height of 450 meters. The tourist infrastructure is well developed here, which attracts travelers from all over the world: hotels, diving clubs, equipped beaches – in a word, everything you need for a comfortable stay and recuperation. 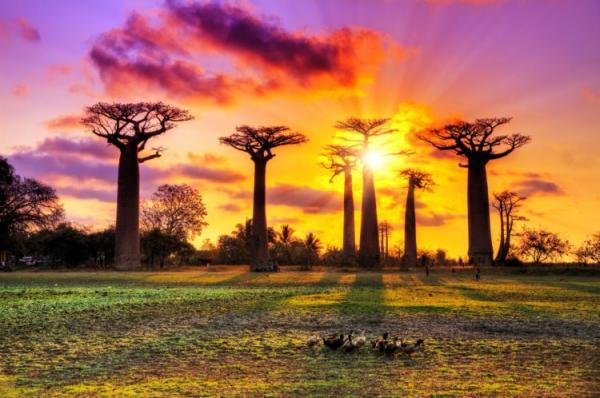 Avenue of the Baobabs at sunset

For the inhabitants of Madagascar, the baobab is a sacred tree, it is revered along with various deities. Therefore, with the development of agriculture on the island, forests were actively cut down, only baobabs remained intact. Therefore, old baobabs now rise along the edges of one of the roads, forming a kind of corridor. The trees growing in this alley belong to a very rare species of endemic plants, the height of which reaches 30 meters, and the age is about 8 centuries. 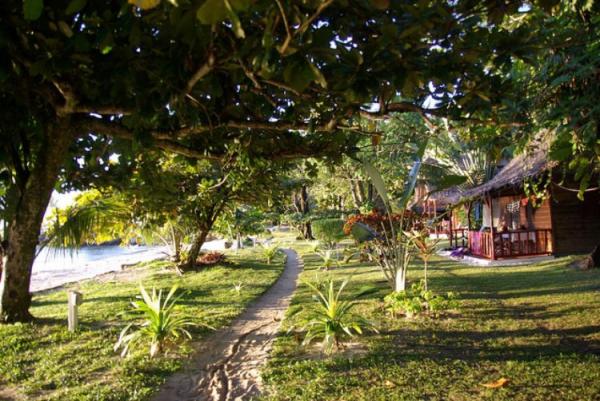 About 7 kilometers off the coast of Madagascar is the narrow and long island of St. Mary. This place is known throughout the world as a Madagascar attraction, providing all the opportunities for a beach holiday, diving and fishing. the island is famous for its white sandy beaches and clear azure sea. Nowadays, this is one of the most visited islands in Madagascar, so in recent years a large number of hotels, restaurants, diving clubs have been built here, which attracts more and more tourists every year.

14. Lemurs are the symbol of Madagascar 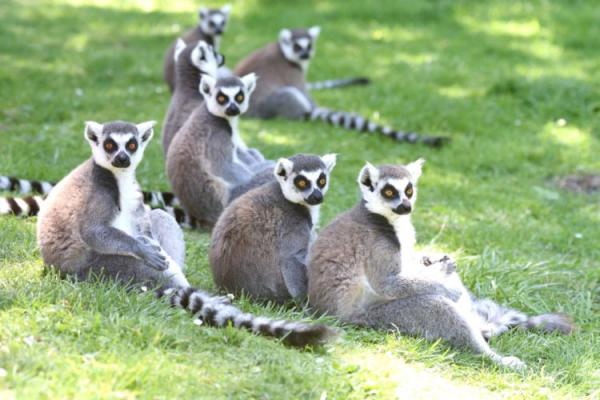 The nature of the island is so unique that only here there are several dozen species of lemurs that have become a living attraction of Madagascar. These animals are primates and are often mistaken for monkeys. In fact, lemurs are the progenitors of modern apes. They are trusting, disposed towards people and peaceful. Their appearance is very cute – large round eyes, fluffy fur and relatively small size. The smallest species of lemurs are very tiny and weigh about 30 grams, while the weight of the largest individuals reaches 10 kilograms.

A trip to Madagascar is a trip to a unique island-reserve, where each tourist can relax in his own way: visit the mountains of volcanic origin, take photos of dizzying landscapes, climb into the very thickets of mangroves, visit huge vanilla plantations, soak up endless beaches and visit other interesting places. Read also about the sights of South Africa and get inspired for your next trip to African countries! 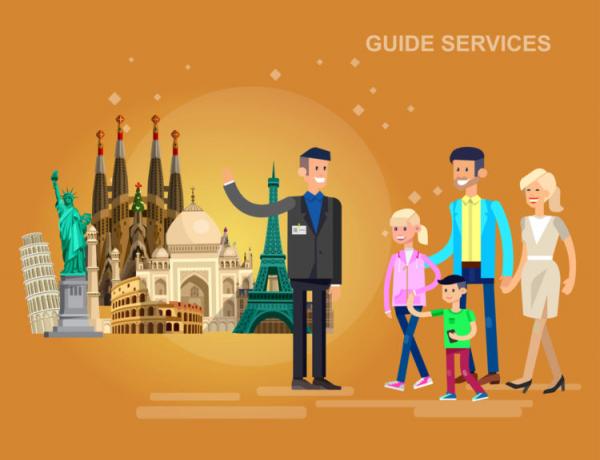 Working as a guide: main difficulties and ways to solve them 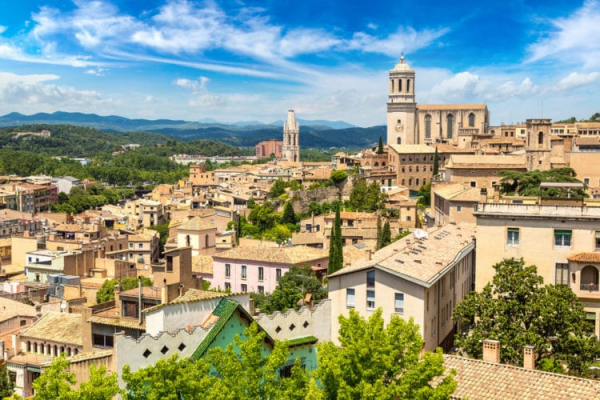 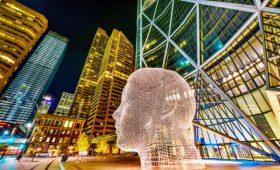