Suzdal — a unique city-museum, which has almost completely preserved its original appearance. There is no such concentration of historical monuments of the XIII-XIX centuries anywhere in Russia. The popularity of Suzdal is not only in churches, but also in good tourist infrastructure. How to get to Suzdal, where to stay and what to do. 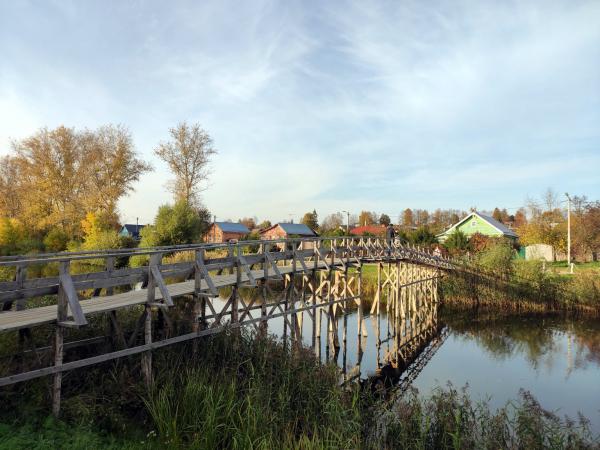 How to get to Suzdal from Moscow and Vladimir

Getting from Moscow to Suzdal is faster than it seems. The last time we did it was 2 hours and 10 minutes. We compare all types of transport. 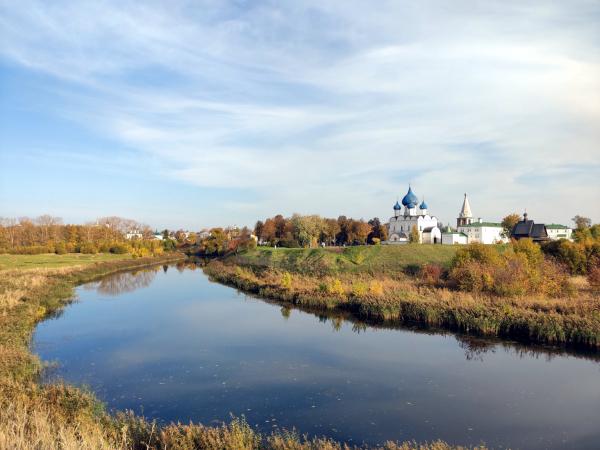 Moscow-Suzdal by car (the longest)

The distance between Moscow and Suzdal along the highway is 224 km. Drive along the M-7 to Vladimir, then turn towards Suzdal (38 km). Due to constant traffic jams and road repairs — this is the longest route (4-5 hours or more). The advantage is that you can explore other places in the Vladimir region by your own car. You don't need a car in Suzdal itself.

Direct buses to Suzdal run from the Central (Schelkovsky) bus station in Moscow. Travel time is from 4 hours 5 minutes, but no one guarantees it to you. Buses travel along the M7 highway with the same traffic jams. timetables and tickets

The nearest railway station to Suzdal is in Vladimir. You get to Vladimir by train, take a bus or taxi there and in 30-50 minutes you are already in Suzdal. 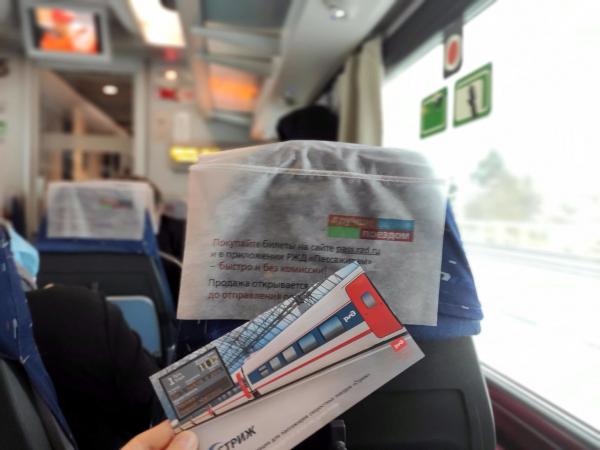 There are up to 34 trains a day between Moscow and Vladimir, choose high-speed ones. The fastest and most comfortable «Strizh» — 1 h 39 min, «Swallow» travels 1 hour 46 minutes. Trains to Vladimir depart from the Kursk railway station in Moscow and from the new Cherkizovo terminal of the Vostochny station complex. Buy train tickets in advance than before — the more seats and cheaper. 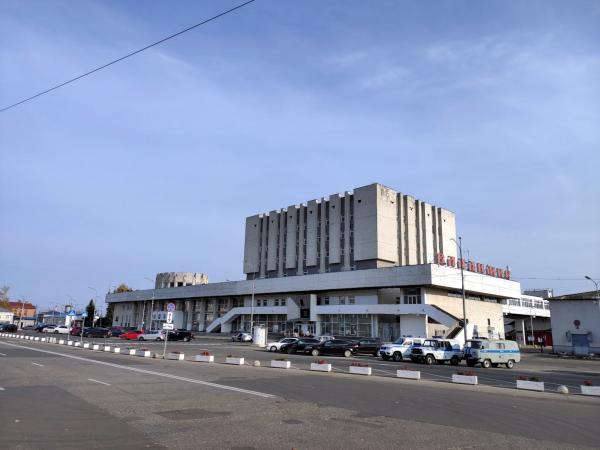 Vladimir bus station is opposite the railway station. Buses to Suzdal depart every 30 minutes. Direct bus number 159 travels 50 minutes with all stops passing a little faster. timetable and tickets

Taxi to Suzdal can be ordered through the application, it arrives quickly. If you like the driver, immediately arrange a return trip — the price of a taxi from Suzdal is 1.5-2 times higher than there. Drive 30 minutes.

Where to stay in Suzdal

There are large hotel complexes, hotels and guest houses in Suzdal.
With apparent abundance, everything is busy on weekends and holidays. Book early!

Art Hotel Nikolaevsky Posad 4* — tourist complex of the European level, built in the style of a merchant's estate. It is located near the park next to the Spaso-Evfimiev Monastery. 3 restaurants, fitness club, swimming pool, parking, tennis court, mini zoo. Has many awards for the quality of service. Pushkarskaya Sloboda 4* — a hotel complex near the Kremlin and the Museum of Wooden Architecture. The provincial style of an old Russian town with 19th century houses and log cottages has been recreated. 4 restaurants, bars, Russian bath, spa with hammam, children's playground, free private parking. Eco-hotel HOT KEYS 4* (former «Heliopark» and «Azimut»). Country hotel in Russian style with a large territory. It is located on the outskirts of Suzdal behind the Spaso-Evfimiev Monastery. Accommodation in residential buildings and guest houses. Bath complex of 12 Russian baths with access to the pond. Events and master classes are held. The Teatralny 4 * hotel complex is located on a quiet street next to the Pokrovsky Monastery, on the second floor there is a real belfry. Spacious rooms, bar with billiards, parking. Free tea with donuts for guests. GTK Suzdal 3* — The very first tourist complex in Suzdal was opened in 1977 in the bend of the Kamenka River. It is still one of the largest tourist centers in Russia — 199 hotel rooms and 97 townhouses, camping area. The price includes breakfast, access to the pool and gym. Activities and animation for children.Kremlevskiy Hotel 4* — a small hotel across the river from the Suzdal Kremlin. Each room is individually decorated, traditional Russian cuisine is served for breakfast, and there is a garden with pavilions on the territory. Sokol 4 * hotel is located in the very center of Suzdal, in the former mansion of the 18th century merchant Voronin. Opposite the Market Square, where fairs and festive events take place. The hotel has a good restaurant.All hotels in Suzdal 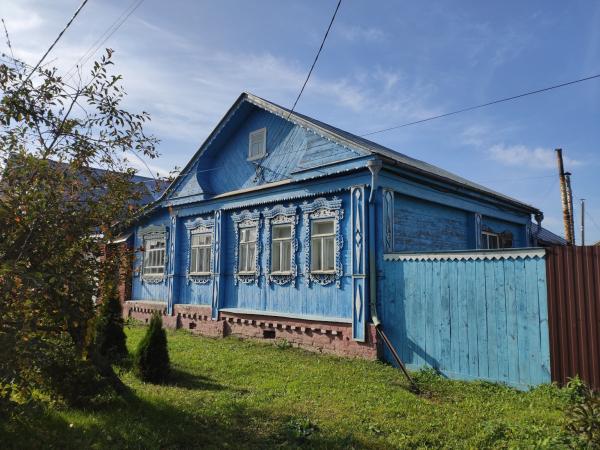 Accommodation in guest houses is very popular in Suzdal. You can rent a whole house with all amenities for a large company or a room for two. We lived in a guest house with our own sauna and a patio with a barbecue area. 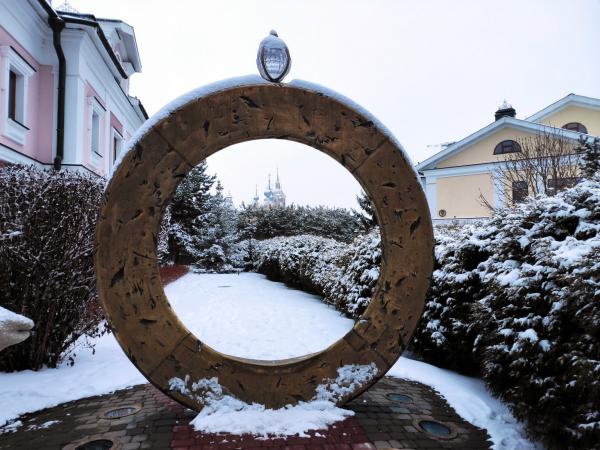 Suzdal is called the pearl of the Golden Ring of Russia. The city-museum has preserved 306 monuments of architecture and culture, including 5 monastic ensembles, 30 churches, 16 bell towers, dozens of civil buildings. In 1992, UNESCO included the monuments of Suzdal in the list of World Heritage Sites.

You can walk around Suzdal with a free audio guide «Around the World» in izi.TRAVEL application. On tours of Suzdal, local guides will show you the main sights and tell you about the history of their city. 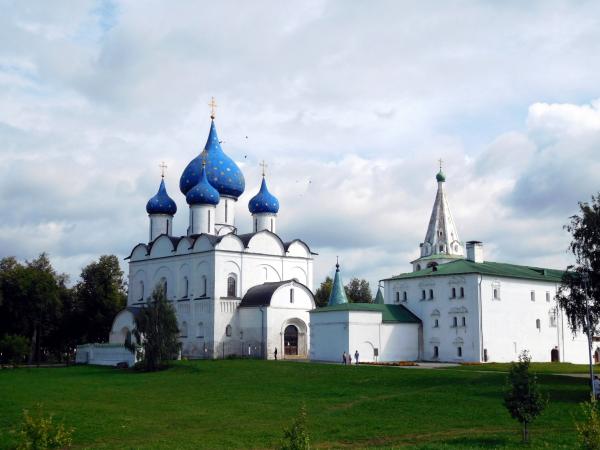 The Kremlin is located in the bend of the Kamenka River. Wooden fortress, built in the XI-XII centuries. to protect the city, over time it was transformed into white stone buildings. Visiting the territory of the Kremlin with an entrance ticket, the complex ticket includes all the objects of the Kremlin museum complex.

Architectural ensemble of the Suzdal Kremlin

The monastery was founded in 1352 by Prince Boris Konstantinovich. He received the prefix Evfimiev in honor of the first abbot Euthymius of Suzdal, canonized as a saint. The monastery is surrounded by a red brick wall with 12 towers from the 17th century. Entrance to the territory and museums with a complex ticket.

The architectural ensemble of the Spaso-Evfimiev Monastery

White stone detox: Vladimir, Bogolyubovo, Suzdal and Kideksha in one day Immerse yourself in history with interest, learn about the unique architecture and admire the UNESCO heritage 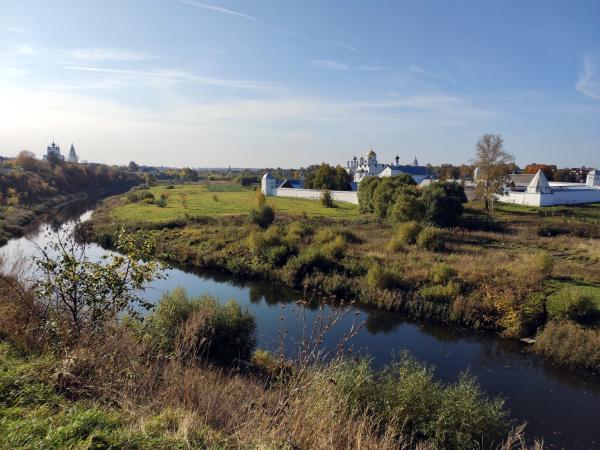 The current convent of the Vladimir diocese of the Russian Orthodox Church. The year of foundation is considered to be 1364. Representatives of famous families were exiled to the Intercession Monastery and ended their lives. The main shrine of the monastery — the relics of St. Sophia of Suzdal & # 8212; wife of Ivan the Terrible, Grand Duchess of Moscow Solomonia Saburova. Entrance is free.

One of the oldest monasteries in Suzdal (1207) is not in the best condition now. Open territory.

Architectural complex of the monastery 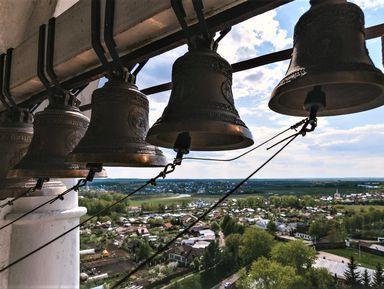 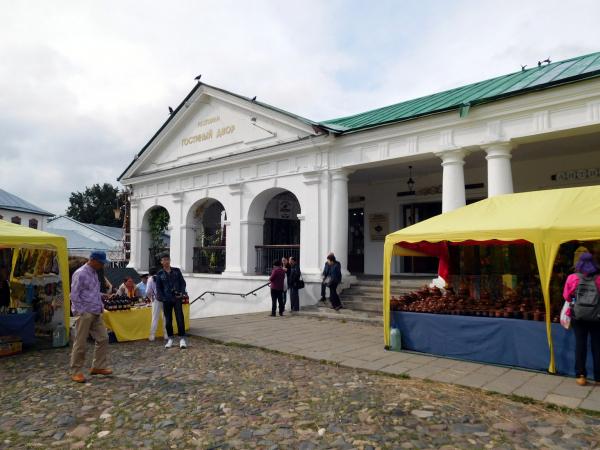 The building of the Trade Rows was built in 1806-1811. in the Empire style and is still used for its intended purpose — for shops and restaurants. There are several churches of the 18th century on the Torgovaya Square. Here they sell food and souvenirs, hold fairs and events. 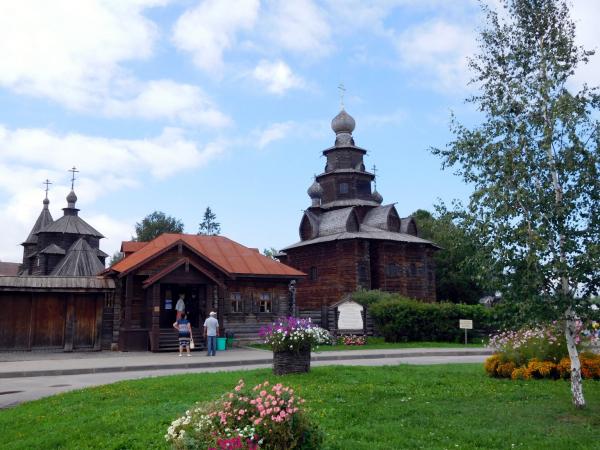 The open-air museum contains 18 monuments of wooden architecture of the 18th-19th centuries. from the Vladimir region. On an area of ​​3.5 hectares there are peasant houses and outbuildings: mills, a temple, a chapel, a well, barns, a bathhouse. Inside the exposition, telling about the ancient Russian way of life. Single entrance ticket.

Suzdal at the cinema 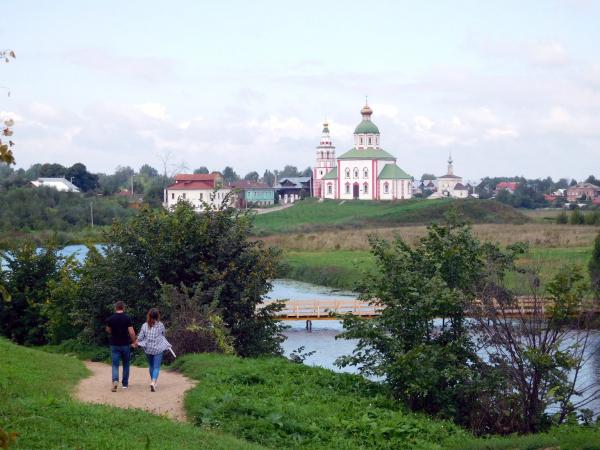 While walking around Suzdal, it may seem to you that you have already seen it somewhere. Suzdal became a film set for many feature films. Balzaminov's Marriage, The Magicians, Snowstorm, Tsar, Dead Souls, Peter the Great, The Brothers Karamazov were filmed in the city and its environs…

On the territory of the State Customs Committee «Suzdal» a monument was erected to director Andrei Tarkovsky and his film “Andrey Rublev”, also filmed in Suzdal. And the song “Three White Horses” from & # 171; Charodeev & # 187; sounds in New Year's Suzdal at every turn. 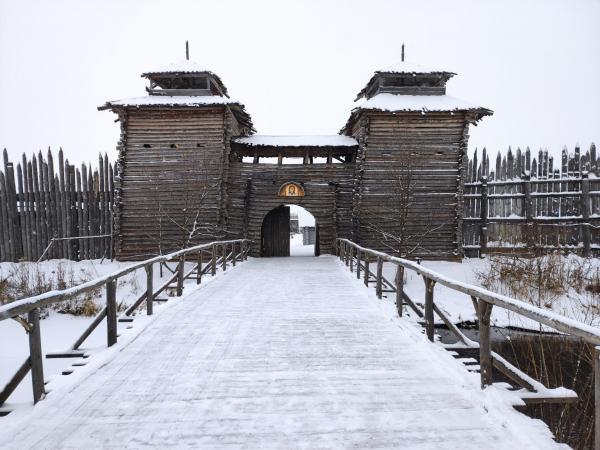 Based on the scenery for the film by Pavel Lungin “The Tsar” (2008), the museum “Shchurovo Settlement” was created in Suzdal. Free entry through the eco-hotel Goryachiye Klyuchi. 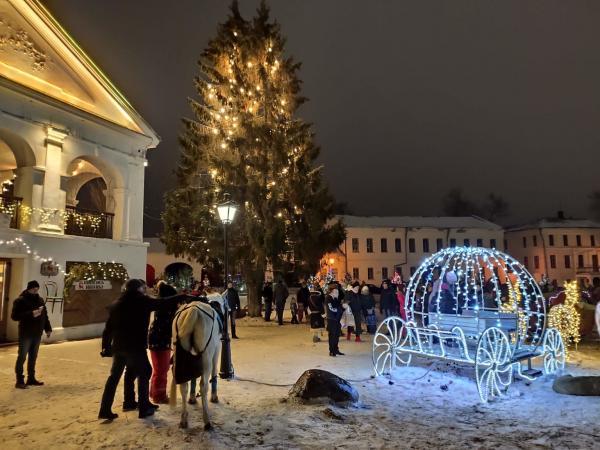 People come to Suzdal for traditional holidays and local events. If you want to join the folk festivities on Maslenitsa, New Year and Christmas — book everything in advance: from the hotel to the baths and restaurants. Weekend prices go up, but queues line up.

Suzdal also hosts the Open Russian Animation Film Festival, the International Blues-Bike Festival, a marathon, a festival of sacred music and bell ringing, and concerts. Holiday programs for children and adults are organized in all hotel complexes.

Depending on the season, in Suzdal you can ride in a horse cart or sleigh, on a ferry or snowmobile. You yourself will not notice how you will be involved in master classes, treated to mead and taken for a ride with the breeze. We have been to Suzdal 4 times and do not plan to stop there.

Rostov-on-Don is a city with taste! 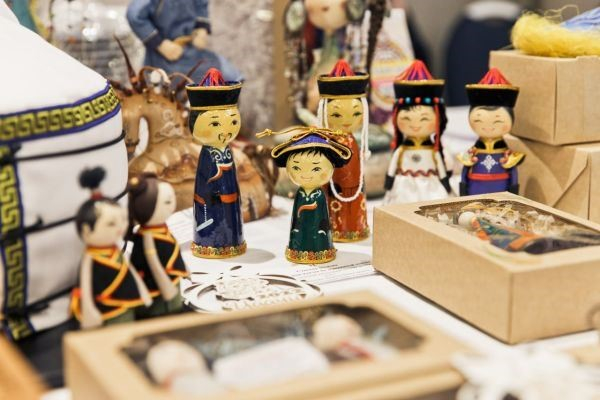 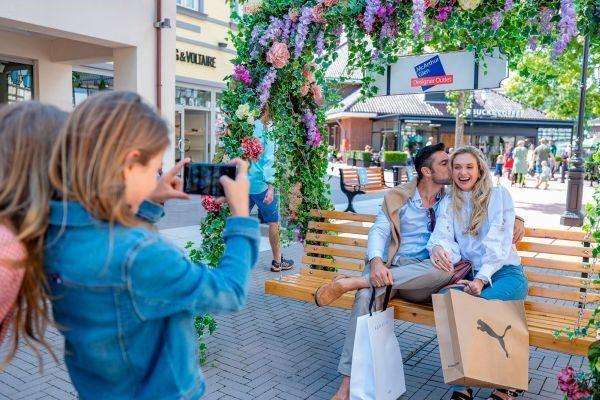