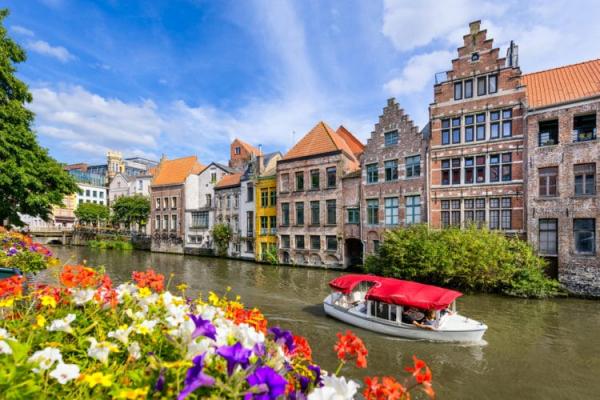 After reading our review, you will know what every tourist must see in Ghent. Taking into account the reviews and recommendations of experienced travelers and guides, we will list the most wonderful and interesting sights in Ghent.

What to see first in Ghent?

The Belgian city of Ghent impresses not only with its fabulous beauty and hospitality, but also with a large number of historical and cultural attractions. The following excursions in Ghent are the most popular with locals and vacationers:

The construction of the Town Hall began at the end of the 14th century. The architecture of the majestic building shows many elements of the Renaissance and Gothic. You can see such sights of Ghent not only from the outside, but also from the inside. Of great value are the throne of King Joseph II, the stained-glass windows of the Wedding Chapel, the tiled labyrinth floor of the Hall of Appeasement, made in white and black colors, the wooden vaults of the Arsenal Hall. 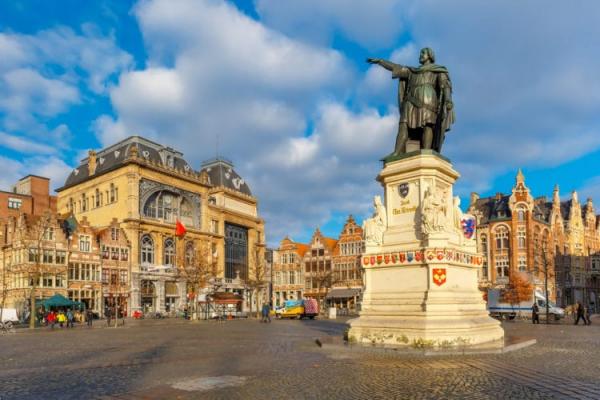 On the main square of the city there are many old Gothic buildings. In the Middle Ages, public executions and coronations of the country's monarchs were held here. The Friday market, which is still open today, dates back to the 12th century. In the central part of the square, you can see a monument decorated with the coats of arms of various trade guilds. Visiting such interesting places in Ghent is especially recommended for gourmets: a huge number of restaurants and bars are open on the territory. Among others, there is the famous Dulle Greet beer tavern. 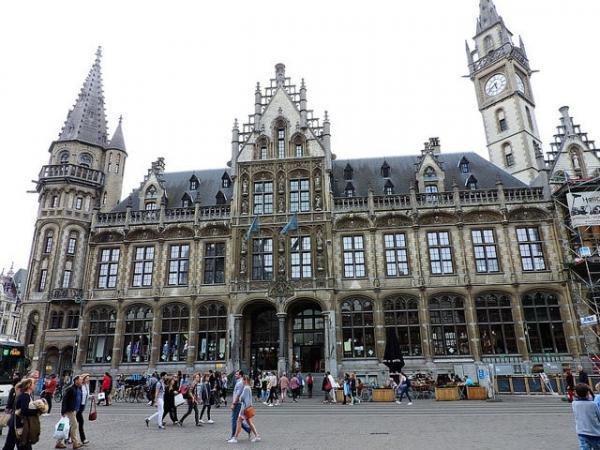 The date of construction of the architectural monument is the beginning of the 20th century. The Neo-Gothic building has two floors, a square bell tower with a spire and a clock, and several corner octagonal turrets. The façade is adorned with three female figures and a dozen smaller sculptures – objects symbolizing Belgium and its regions. Now there is a shopping center inside the former post office. 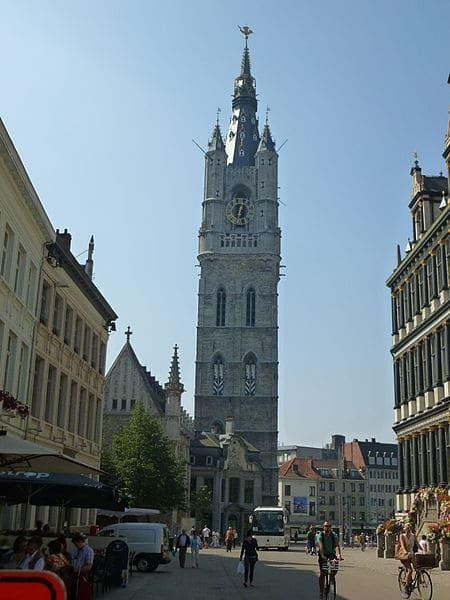 The height of the grand structure, created in 1338, is more than 90 meters. In former years, from this watchtower of Beffroy, decorated with an old clock and a dragon weather vane, the townspeople were informed about enemy attacks, floods, fires and other disasters. At the entrance to Beffroy there is a staircase with four hundred steps. Having overcome them, you will be able to climb to the observation platform, which offers unique panoramas of the entire city. We have included Befroy in our ranking of “the best sights in Ghent”, given that the tower has two museums at once: with a collection of bells and with an archive of previously secret documentation.

5. Castle of Gerard the Devil 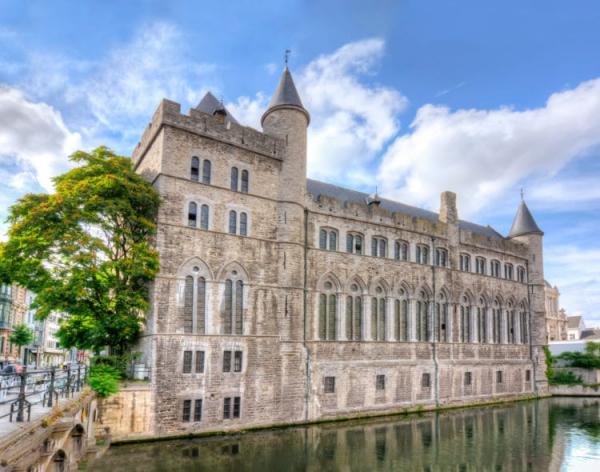 The best option for where to go in Ghent for fans of horror and mysticism. The 13th century palace belonged to a knight called the Devil for the alleged murders of five wives. According to legend, the knight was no less cruel than the famous Bluebeard. The castle is made in the Gothic style and is considered the oldest stone building in the city. In various eras, it was used as a mental hospital, a prisoner, a monastery, an armory. Tours of the palace are held today for tourists.

Feel the atmosphere of Ghent in this beautiful video!

6. Castle of the Counts of Flanders

This huge stone palace of 1157 is included in all the lists of “the main attractions of Belgium” for a reason. Guides in Ghent like to say that the castle of the counts is the only building in the state that demonstrates the way of life and traditions of the Middle Ages in full. For many centuries, the palace of Flanders was used for completely different purposes: it was a defensive fortress, a courtroom, a prisoner, a textile factory, and even a mint. Currently, there is a museum inside, in one of the halls of which real weapons and armor of medieval knights are stored. Impressive tourists, perhaps, should not examine all the values ​​of the museum complex. Several collections are based on real weapons of corporal punishment and torture. But we recommend that all guests of the castle climb to the upper level to the observation deck. 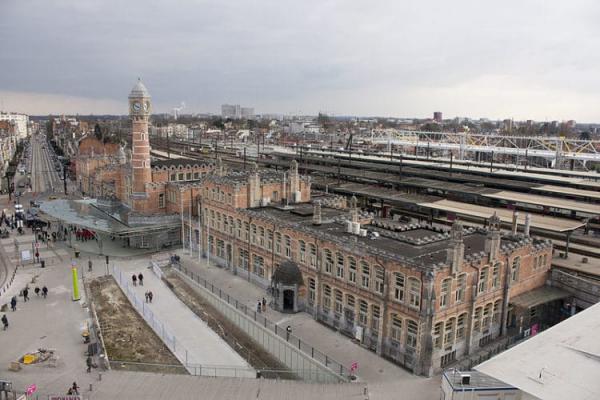 This luxurious railway station was originally a modest station. The current building was erected at the beginning of the 20th century. The last restoration took place in 2010. From Ghent-Sint-Peters you can travel by train to anywhere in the state. 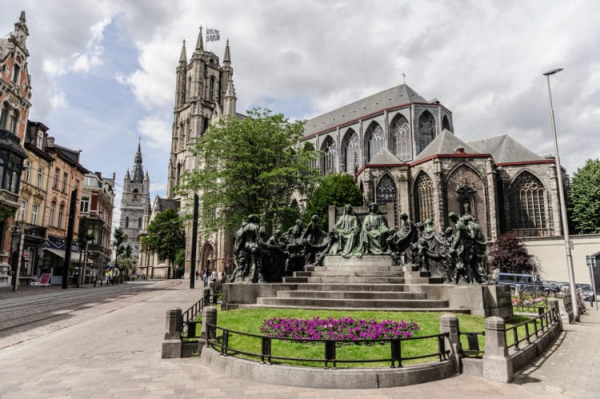 Sculpture on the lawn in front of St. Bavo Cathedral on a summer afternoon

The property is owned by the Roman Catholic diocese. Previously, a small wooden temple was located on its territory, later rebuilt into this large-scale Gothic building. The most valuable relic of the cathedral is the altar, which was painted by the Eiki brothers (talented artists of the Renaissance). 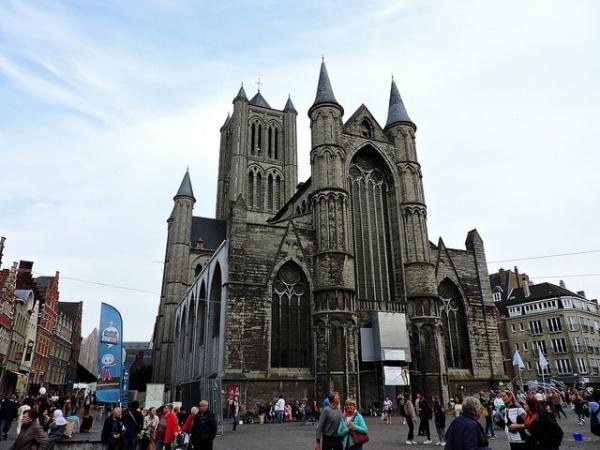 The church of St. Nicholas in gray-blue stone from Tournai on the Korenmarkt square in Ghent Dimitris Kamaras

Your trip to Ghent should certainly include a visit to one of the oldest churches in the city. Previously, in its place was a Romanesque chapel, built at the beginning of the 12th century. However, the fire destroyed it entirely. The new building made of gray-blue stone is made in the Gothic architectural direction. For its construction, a fundraiser was held from the townspeople. Over the years, the temple has been rebuilt many times. In the 16th century, it fell into disrepair, and restoration work continues to this day. Currently, only the main nave is open to tourists, with a magnificent organ by A. Cavalier Collet, an altar decorated with gilding and a pulpit made of wood.

10. Church and bridge of St. Michael 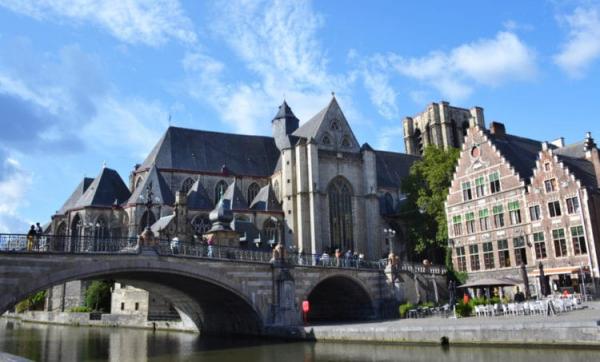 View from the Graslei embankment to the church and the bridge of St. Michael on the Leie River in Ghent

The majestic church of the 15th century, built in the Gothic style. Construction work continued for several hundred years. A colorful bridge stretches from the building towards the Fox (river). It is recommended to visit the bridge in order to enjoy the views of the medieval streets, towers and churches of Ghent. 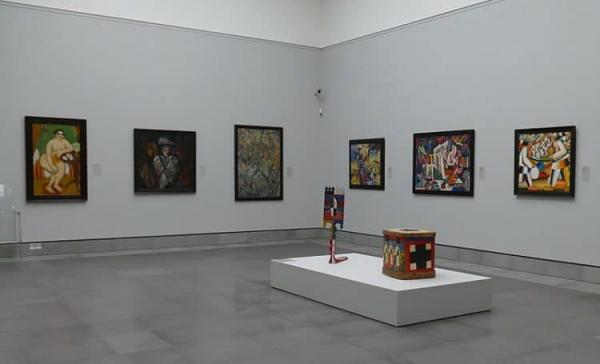 What to see in Ghent in 1 day for art lovers? This museum with its numerous canvases seized from various religious associations. The opening date of the complex is 1904. Note that many paintings were taken to Paris and never returned to the city gallery. 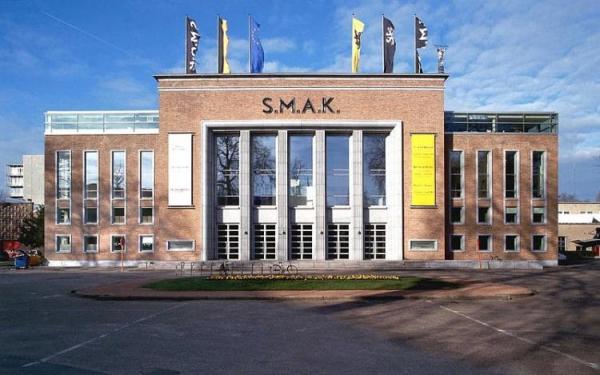 The opening date of the museum complex is 1999. The art center is a huge success due to the fact that it holds rather provocative and bold events and exhibitions. Among the permanent exhibits are paintings by Beuys, Bacon, Warhol and other famous contemporary artists. In addition, guests are invited to get acquainted with samples of temporary collections imported from various fashion galleries in the country and the world.

13. Museum of Industry, Labor and Textile

Printing presses at the Museum of Industry, Labor and Textiles in Ghent Lalieka

The complex is located in the building of a former textile factory in the very center of the city. Local examples tell how Belgian industry developed in the 17th and 18th centuries. Most of the exhibits are made of textiles. In addition, the expositions include all kinds of production equipment, spinning wheels and looms. 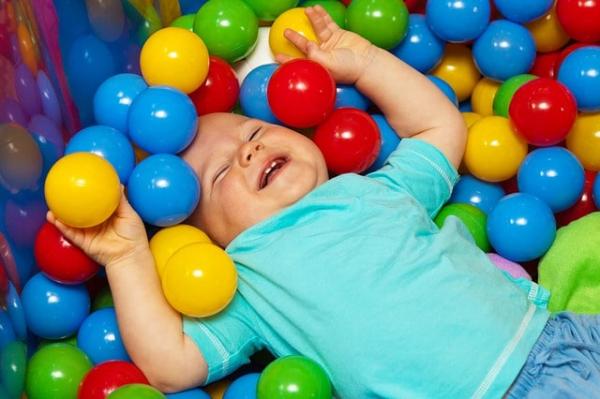 If you do not know what to visit in Ghent with the whole family, come to this entertainment complex with its many playgrounds. For the most part, soft rides that are safe for kids are installed here. However, some attractions are designed for older guests. There is a café on site. 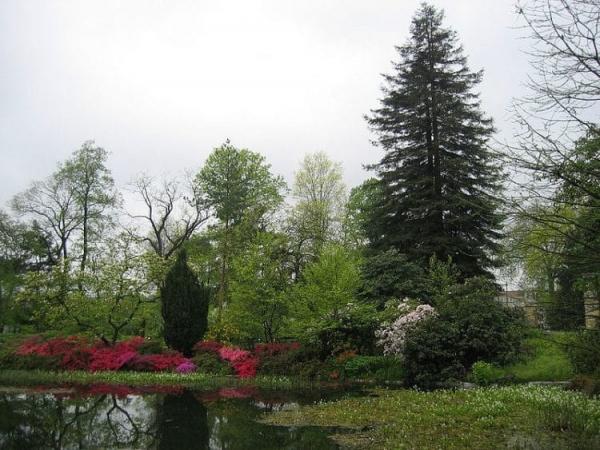 The garden, equipped by order of Empress Maria Theresa, has quite impressive dimensions. Numerous employees carefully monitor the area. Everywhere cleanliness and comfort, there are many benches and benches. The great interest of tourists, as a rule, is caused by various types of cacti planted in the open air.

Ghent sights: what else to visit in Ghent?

We told you about the main sights of Ghent briefly. In addition to them, you should definitely see: 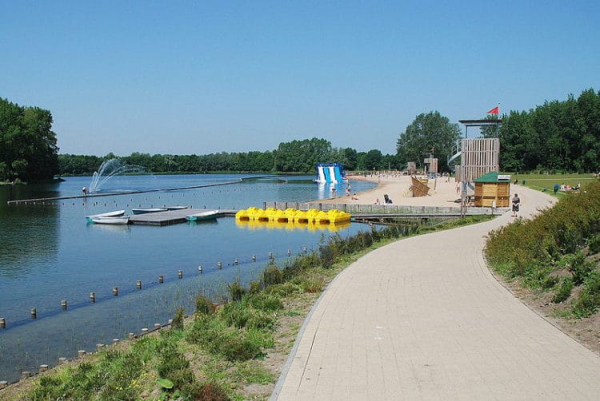 Suburban park complex with playgrounds for children and sports games, its own sandy beach. In the warm season there is an opportunity to swim in the lake with clear water. An ideal place for a relaxing holiday in nature, walking and cycling.

17. The complex of protective structures Works

The structure, also called simply the Three Towers, is part of a 15th-century fortress. The complex of protective structures Works consists of a bridge, a stepped facade located in the middle and two round towers. After the need for the defense of the city disappeared, the building began to be used as a warehouse, tavern and archive. Now seminars and conferences are held here. 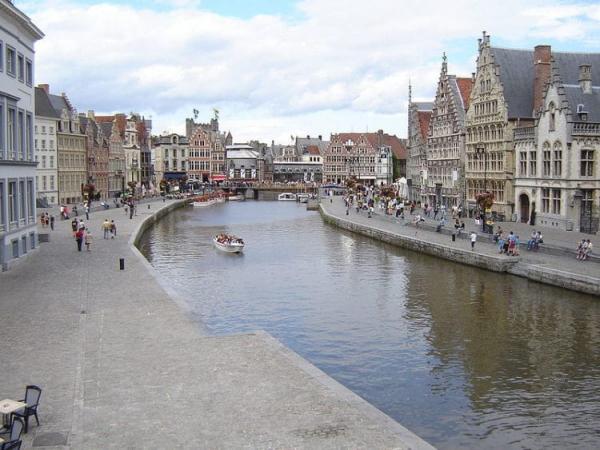 These medieval streets are home to the best hotels in Ghent. As well as cafes and restaurants serving fluffy Belgian waffles and traditional french fries. Your trip here will be unforgettable if you decide to ride along the Lys River, along which the streets stretch, in cruising pleasure boats. The duration of the trip will be 40 minutes, during which you will be able to see the whole magnificent Ghent: look at the mighty walls of the palace of the counts, the Big Butcher's House, the Flanders facades of cottages built by the local rich people of the 13-17th centuries. 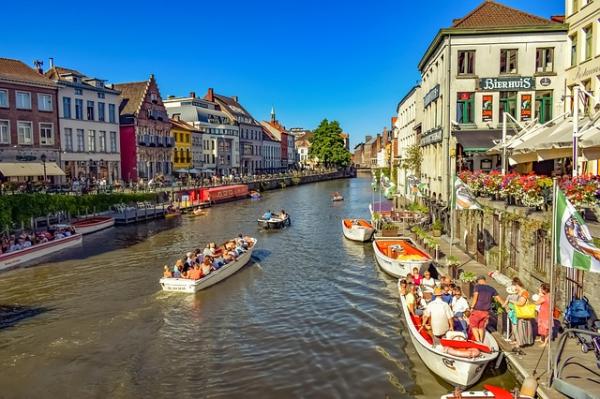 Cityscape – canal at night in the Old Town of Ghent

You can explore the beauties of the city by renting small boats and riding along the local canals. Within an hour you will be able to see all the architectural masterpieces of Ghent, as well as learn a lot of fascinating facts about them.

This beer bar is a real city landmark. Inside there is always a cozy and pleasant atmosphere. The interior is made of wood, with converted beer barrels as part of the tables. Looking at the ceiling, you can see crazy witches and other fairy-tale characters. At Dulle Greet you will be offered approximately 250 varieties of foamy drink. However, the popularity of the tavern was brought not by a varied beer menu, but by an old ritual: when a guest orders a huge glass of local beer, he must hand over his right shoe or shoe to the bartender. Shoes are placed in a special basket, fixed under the ceiling. If the client cannot finish drinking the foamy drink to the end, he is left without shoes. It is returned only after the guest has completely emptied a liter flask with beer.

We hope that you personally see all those sights of Ghent, photos with names and descriptions of which we have selected for this article. Read also about the sights of Bruges and be inspired to travel further in Belgium. 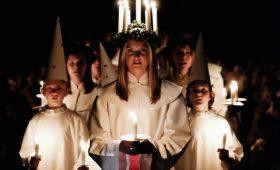 Have fun and have fun celebrating the New Year: 9 famous winter festivals from around the world that are worth seeing at least once

The best 5-star hotels in Marmaris: choosing where to relax on an all-inclusive basis 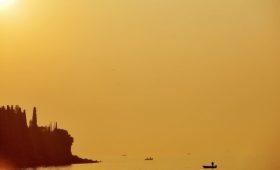 In all lightness: how the inhabitants of the Croatian peninsula of Istria found the path to happiness by indulging their desires