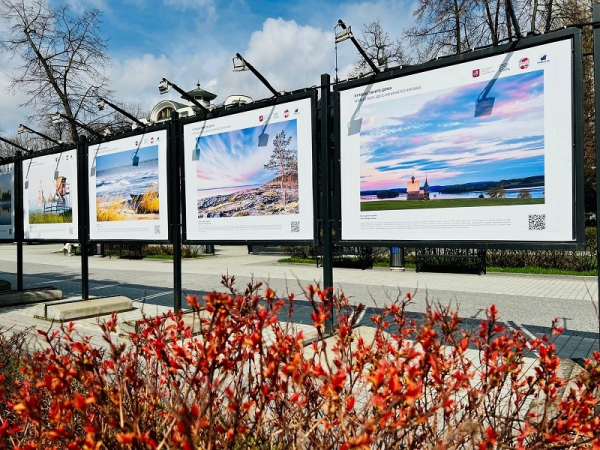 Travel portal TRIP2RUS.RU and Moscow Hermitage Garden present a new joint photo project – the exhibition “Travel at Home”. This time it unites two northern subjects of the Russian Federation at once – Arkhangelsk region and the Republic of Karelia. For the first time, the exhibition will become a launching pad for a drawing of a tour for two.

Two regions included in the interregional tourist project “Silver Necklace of Russia” focus on their national tourist routes. “Arkhangelsk: the Arctic begins here” – this is the name of the national tourist route of the Arkhangelsk region. A journey that begins in the first seaport of Russia and reveals the secrets of Arctic expeditions, the secrets of the wooden civilization of the Russian North and traditional shipbuilding. You will get to know the taste of Pomeranian cuisine and see the sand dunes of the White Sea. In winter, you will witness the northern lights, admiring the power of the Arctic heroes — icebreakers, and in the summer enjoy the bright sunsets of endless white nights.

The exposition “Karelia is closer than it seems” will tell about the land of rivers and lakes, there are more than 100 thousand of them in the republic. Ladoga and Onega lakes – the largest in Europe. Of particular charm are the northern shores of these lakes – Kizhi and Ladoga skerries.
The harsh White Sea – the only inland sea in Russia. It has its own attractiveness, its own wildlife, its own unique islands and its own rich history.
People come to Karelia at any time of the year to take a break from the bustle of the city, breathe in fresh air, sit with a fishing rod on the river bank or ride a snowmobile on a frozen lake in winter. Choose what to do: see all 22 domes of the Church of the Transfiguration of the Lord on Kizhi Island or go back in time and ride the Ruskeala Express retro train, eat Karelian wickets with potatoes, millet and wild berries, or see rock paintings of the 4th century BC. , admire the second highest in Europe flat waterfall Kivach or fly over the marble canyon in the mountain park “Ruskeala” on a trolley.

To feel the North and take the first step into the Arctic, the Arkhangelsk region invites visitors to take part in a draw for a trip along the national tourist route for two. Scan the QR code at the stands with the details of the draw and win a tour of the region!

The photo exhibition “Travel at home” is open next to the Novaya Opera Theatre.
FREE ENTRY!

Group Odnono at the Museum of Oriental Art