Skip to content (Press Enter)
Home>Interesting places>Colonel Kvitko's dacha in Sochi: the history and legends of the “Haunted House”

Kvitko's abandoned dacha — landmark of Sochi with a difficult fate. The ruins of the castle on the Black Sea attract lovers of mysticism and photo shoots. How to get to Colonel Kvitko's dacha and what you will see there. 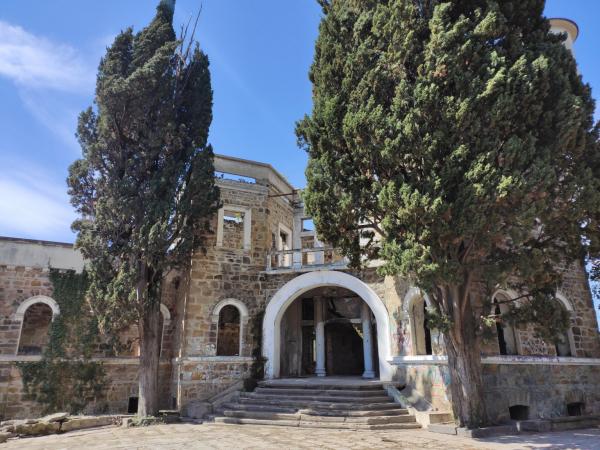 How to get to Kvitko's dacha

The former dacha of Colonel Kvitko is located in Khostinsky Sochi area between the villages of Khosta and Matsesta. Address: Novorossiyskoye shosse 6/9, Sochi.
You can get there by buses and minibuses, stop Krasny Shturm Sanatorium. 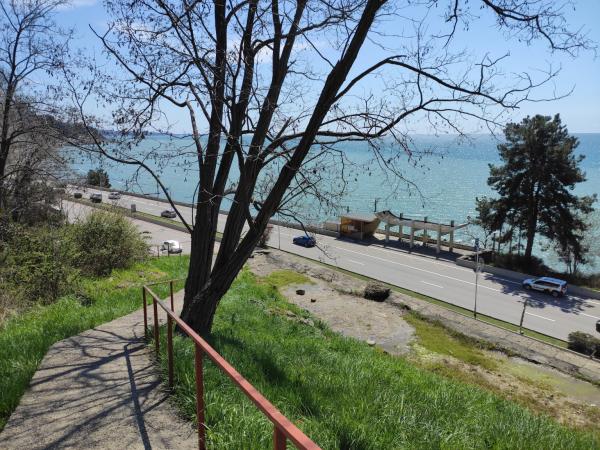 The bus stop is located on the Adler-Sochi highway. If you drive from Sochi, then you need to cross the road through the underpass. From the stop there is a steep climb up the hill (260 meters). The area around Kvitko's dacha is open. Home Visit — 100 rubles. 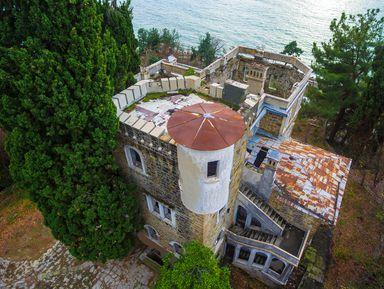 Ancient Sochi Learn about the history of Sochi, walk from the port to the Winter Theater, visit Stalin's dacha and Kvitko's dacha

You can go on a guided tour to Colonel Kvitko's dacha. Guides tell not only history, but also legends about this mysterious place. The tour includes neighboring sights of the Khostinsky district: Stalin's dacha, the Akhun tower, the abandoned Ordzhonikidze sanatorium.

Excursions to the Kvitko dacha

Who is this Colonel Kvitko 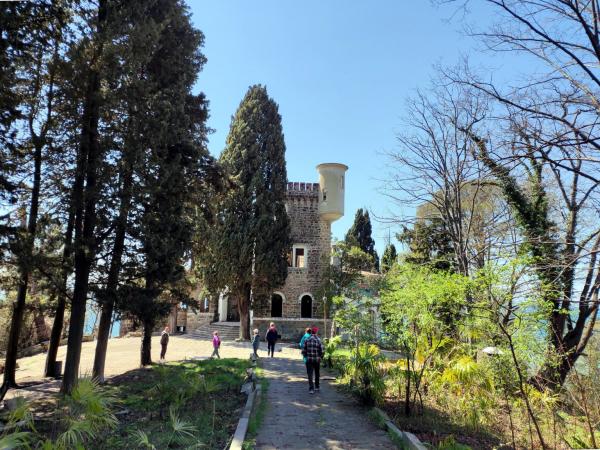 Andrey Valeryanovich Kvitko was a colonel in the tsarist army from an old Little Russian family. He received the title and many awards for participating in the Russian-Turkish war of 1877-78.

Having retired in 1884, A.V. Kvitko took up winemaking, painting, wrote books and traveled a lot. In 1904, when the Russo-Japanese War began, he again went to the front, but was discharged for health reasons. Since then, Colonel Kvitko no longer served and enjoyed life with his beloved wife, Vera Dmitrievna. 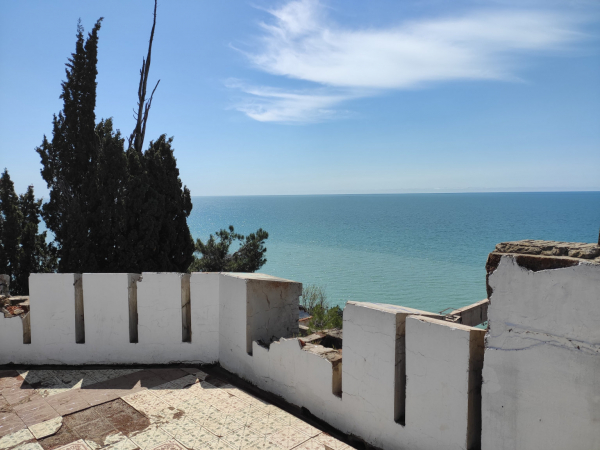 At the beginning of the 20th century, a retired colonel bought a large plot in the area of ​​the Maly Akhun mountain for the construction of a dacha. He liked the beautiful view of the sea from the high bank. 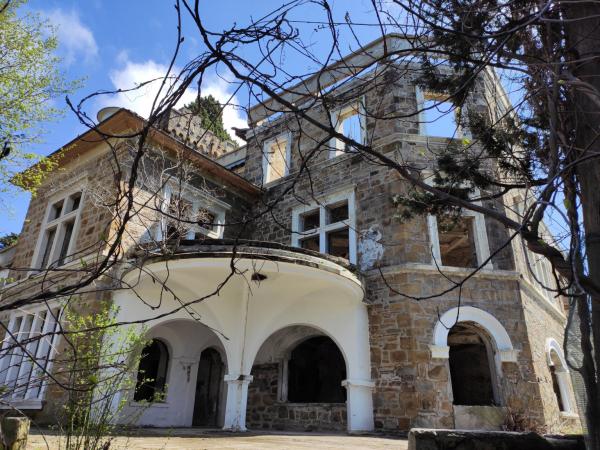 Kvitko's Khosta dacha was built in 1916. The medieval castle house with spiral staircases is decorated with balconies and crenellated towers. They say that this is a copy of the Italian castle seen by the Kvitko couple in a small resort town. The colonel's wife was of Italian origin and made her dream come true in this house. 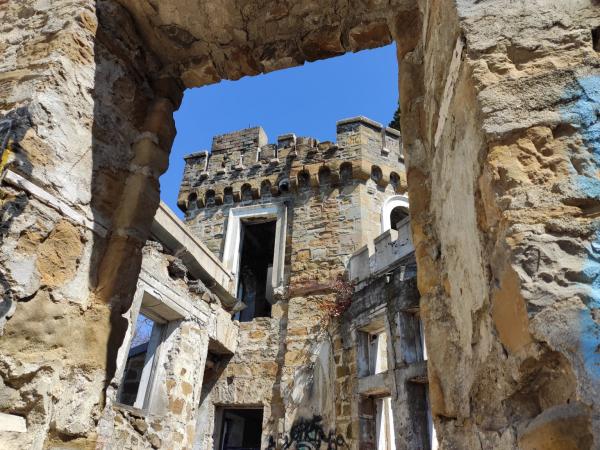 The Kvitko family rested at the Khostinsky dacha in the fall (they also had other dachas in Russia and abroad). They were visited by aristocrats and celebrities, such as Golitsyn, Fyodor Chaliapin, the performer of romances Nadezhda Plevitskaya. Rumor has it that one of the guests of Kvitko's dacha was Joseph Stalin, who later had his own dacha nearby.

With the start of the revolution, 68-year-old Andrei Kvitko and his wife left Russia forever. They spent their last years in their Italian villa near Rome. 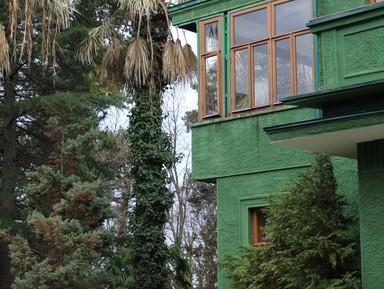 During the Civil War, the abandoned dacha became the headquarters of the army of General Denikin. During the offensive of the Red Army, four White Guards sat on it. An assault was undertaken, in honor of which this place was named «Red Storm». 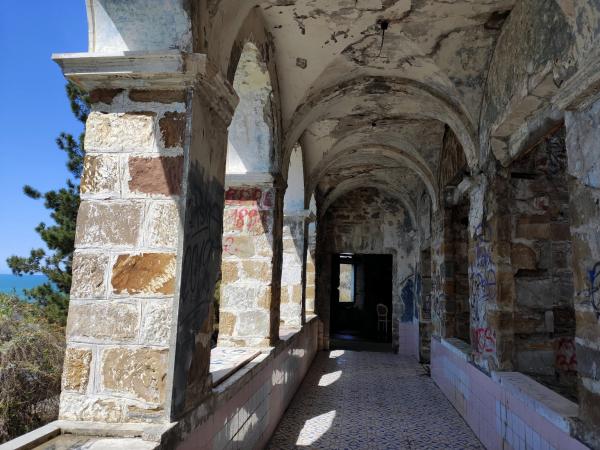 The mansion passed to the Soviet government and over the years has changed many owners. First, in the former dacha of Kvitko, there was a children's labor colony, then a rest house & # 171; Krasny Shturm & # 187;, a sanatorium for NKVD officers, a hospital. Since the 90s, the building has been empty and turned into ruins.

Kvitko's dacha is recognized as an object of the historical and cultural heritage of Sochi. Now the building belongs to the Yunost sanatorium, they are in no hurry to restore it. 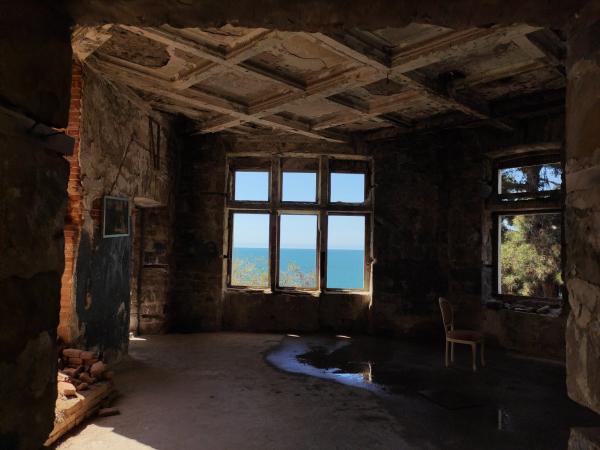 Many mysterious stories and legends are connected with Kvitko's dacha. No one knows what is true and what is fiction. The mysterious castle on the edge of the cliff has gained fame as a «Haunted House», which adds to its special appeal. The legends of Kvitko's dacha are best told on excursions. Here are some of those stories: 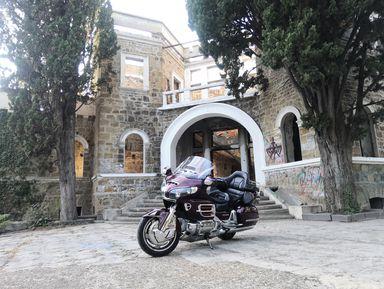 On a motorcycle to the Haunted House! Visit the mysterious castle of Colonel Kvitko and uncover its secrets

Before fleeing from Russia, Colonel Kvitko buried his valuables in the house and in the park. Since then, treasure hunters have been looking for them, but have not yet been found.

The most terrible story happened in the 30s, when Kvitko's dacha was a sanatorium for NKVD officers. Allegedly, the Chekists resting here outraged and killed a teenage girl. The girl's mother — an employee of the sanatorium, took revenge on the killer and then hanged herself. Now three ghosts are walking around Kvitko's dacha. 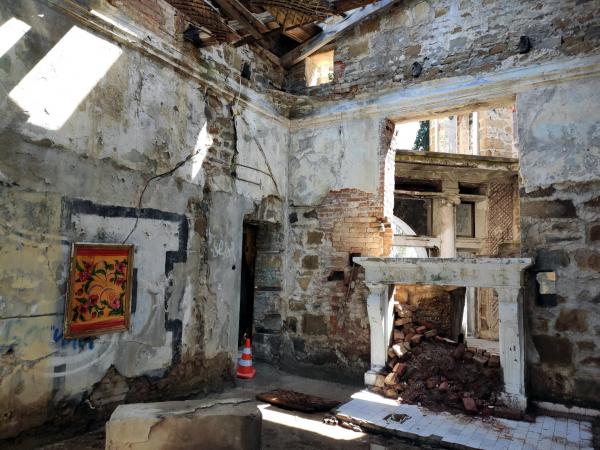 They say that in an abandoned house there is a bad aura and because of this Alla Pugacheva did not buy it. We didn't feel anything like that. Perhaps if you come here on a cloudy day or after sunset, everything will seem different.

We pondered whether it was worth going to Kvitko's dacha — Let's go and don't regret our decision. Before that, we visited the abandoned Ordzhonikidze sanatorium, which is now closed for restoration. These are two completely different and very atmospheric places, reminiscent of the past of Sochi. Be sure to go if you like non-standard routes. 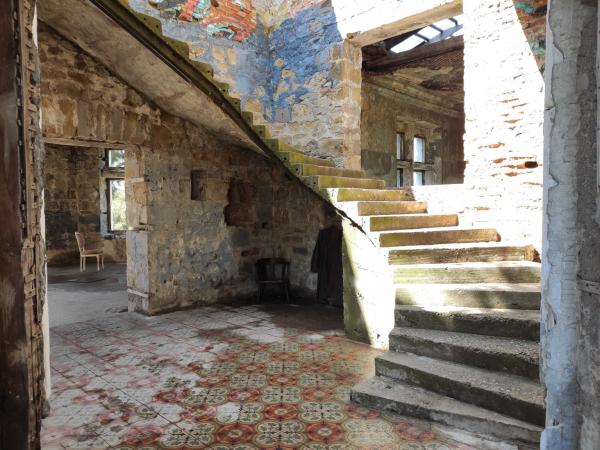 You can walk around the ruins of Colonel Kvitko's dacha for free. Many are limited to this. But we were not sorry to pay 100 rubles for the entrance inside. Entrepreneur Aleksey maintains the house in an acceptable condition at his own expense. He installed wooden floors and stairs, made photo zones, cleans up garbage and keeps order. 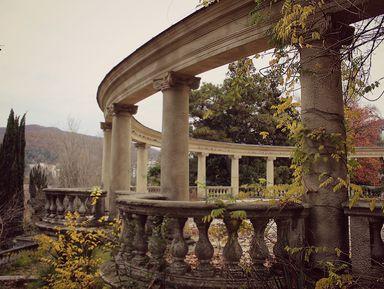 Abandoned Sochi: the resort that we lost See the most spectacular ruins of the city, take unusual pictures and reveal the secrets of these places

In the 90s, when the house turned out to be ownerless, it began to be taken away for building materials. They took everything, even the roof. The building lacks pieces of walls and doors. Walk through the ruins carefully, looking under your feet. Near the dacha there is an emergency house for service personnel, the entrance to which is closed. 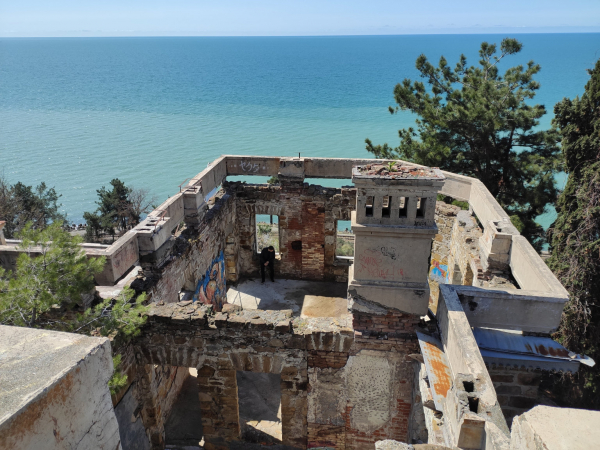 Despite the deplorable state, Kvitko's former dacha has preserved the memory of better days. Italian tiles remained on the floor, the fireplace partially survived, the main entrance and the corner tower look beautiful. But the most striking — this is a panoramic view of the sea from the top terrace. 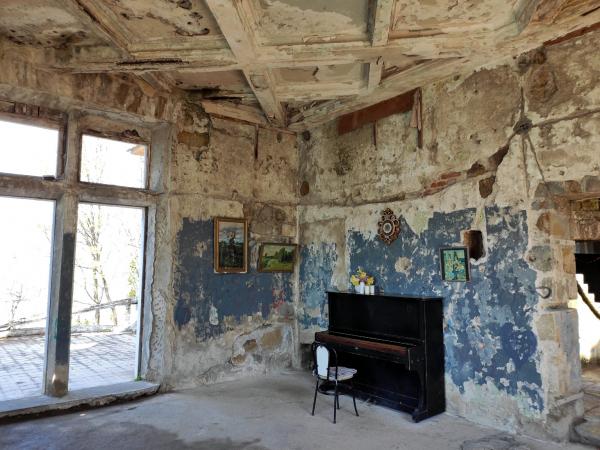 Recently, Kvitko's dacha has become a popular location for photo shoots. There are several photo zones in the rooms on the ground floor, paintings and mirrors hang, there is a piano, which is sometimes played, the walls are painted with graffiti. 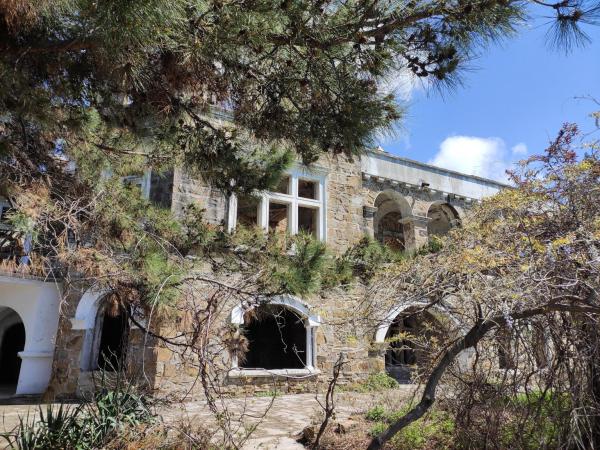 If you want to take colorful photos, it is advised to come in the late afternoon. Before sunset, the light at Kvitko's dacha is simply extraordinary. At nightfall, the building is illuminated. We were at Kvitko's dacha on a sunny spring day and saw the ruins of a medieval castle surrounded by greenery and flowering trees. 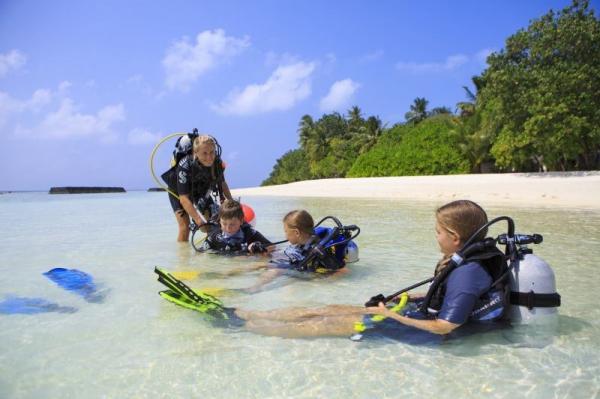 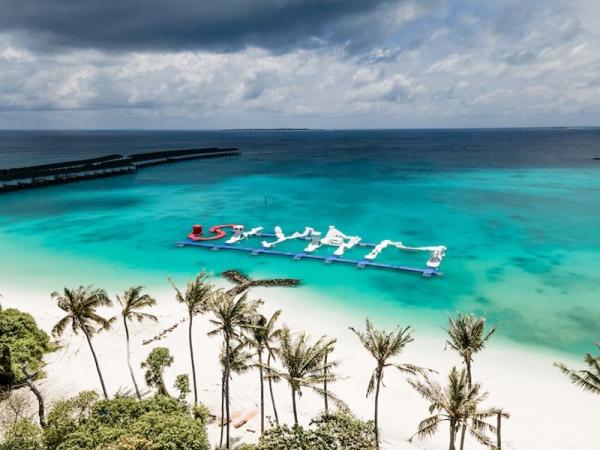 Five reasons to plan your May holidays at Siyam World 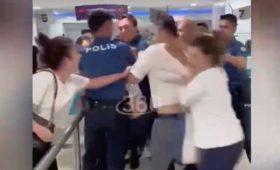