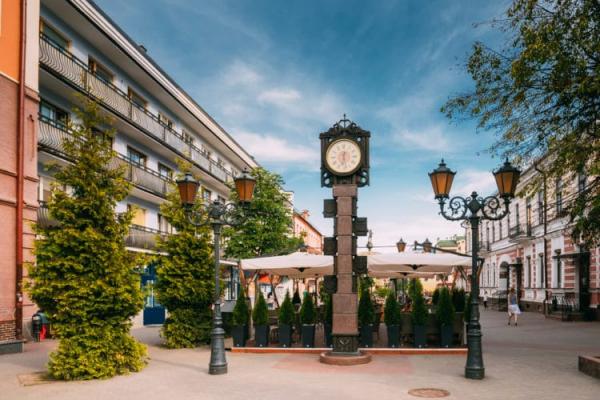 A cozy compact town, planted with pyramidal poplars, is notable for historical sites. Many sights of Brest tell about its military history, so those who are interested in it have a direct road here. We will tell you what to see in Brest, how to spend time with benefits for the mind and body, so that the impressions from the visit remain the most pleasant. It is enough to look at a photo of Brest with names and descriptions to understand how much interesting this city has experienced.

What to see in Brest in the first place

It does not look like a traditional European town in the usual sense, although, of course, clean streets, a cultural population and developed infrastructure are impressive. We offer you to get acquainted with the best sights of Brest and make your own impression of this border Belarusian city. 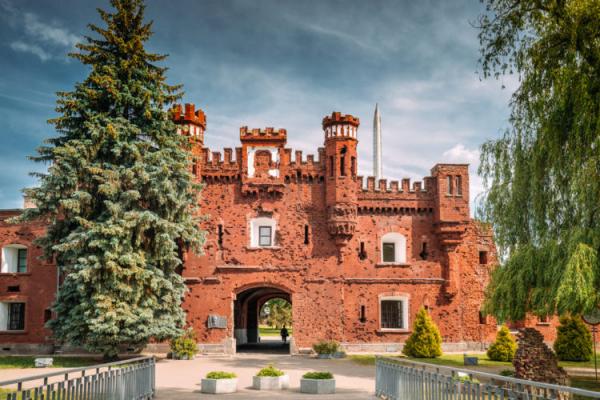 Facade of the Kholmsky Gate of the Brest Fortress

A place-legend, a fortress-hero… What to see in Brest in 1 day if you are passing through the city? Of course, the Brest Fortress. The ruins of fortifications, casemates, a moat and, of course, the memorial itself remind of the war days. I was impressed by the sound design: near the Stella with the Eternal Flame, music sounds, touching, making its way “to the point of goosebumps”. Competent organization of the exposition, providing easy perception of information. Otherwise, it is a pleasant place, a beautiful well-kept park.

No trip to Brest is complete without visiting the monument. A warrior with a banner is the main compositional element of the Brest Fortress. Guides in Brest will tell you how technologically difficult the work on its creation was. On the back, historical excerpts about individual episodes of the heroic defense are carved.

The monument, 13 m long, depicts an unknown soldier who, holding a helmet in his hands, is trying to reach the source. The monument personifies one of the dramatic moments of defense – an acute shortage of water. The sculptor managed to convey the entire tragedy of the situation, the desperate need of the soldiers of Brest. In 2004, the monument was restored by volunteers and caring citizens. 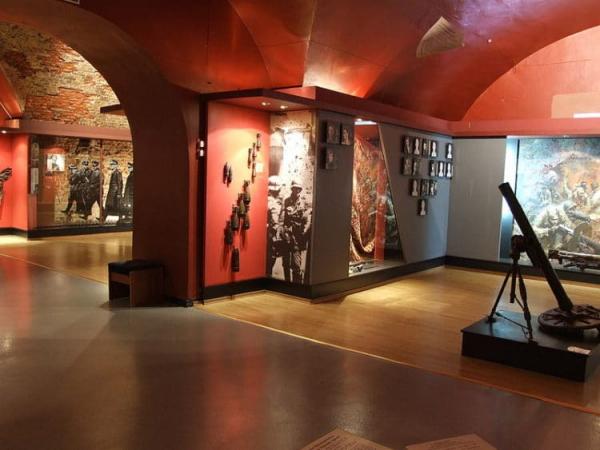 There was a defensive barracks in the Brest Fortress, part of which miraculously survived. Today, a museum has been set up at this place, at the exhibitions of which tourists can see personal items, photographs, and documentary materials that tell about the course of the defense. On the 2nd floor there is the main exposition located in 10 halls. 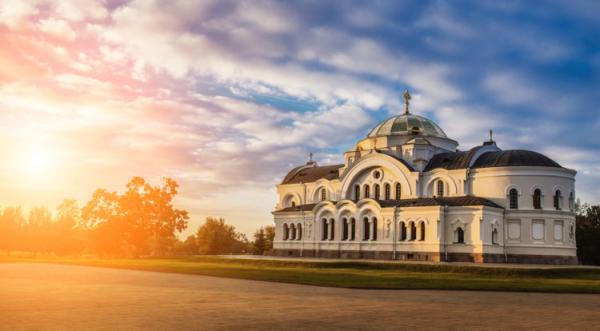 St. Nicholas Garrison Cathedral in the Brest Fortress at sunset

The cathedral on the territory of the legendary memorial was conceived as a garrison church. During the war it was badly destroyed, at the beginning of the last century it was restored and accepts believers. Be sure to come in and see the interior. Inside the temple is cleaned very unusually, because. restoration work is ongoing in some places. The seven-tiered censer with 12 icons deserves special attention. 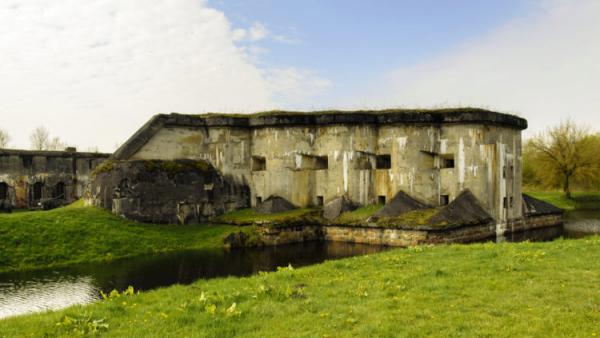 Preserved from the moment of construction in its original form, the museum is a landmark of Brest. The tour impresses emotionally: the stories about the heroism of people, their difficult life during the war are perceived so “alive”. The exposition of military equipment in the courtyard of the museum is interesting.

The remains of the ancient settlement, from which the construction of Brest began, are the property of the country. Going on a trip, be sure to plan a visit here. From above, it is interesting to look at the excavation site with the streets and wooden buildings of ancient Berestye, household items and decorations of the ancient Slavs.

We will advise what to see in Brest for those who are interested in the history of the city. The entertainment complex embodies the collective image of the townspeople and is represented by sculptures of prominent historical figures. Its location on a pedestrian street in the center makes it a very visited place. 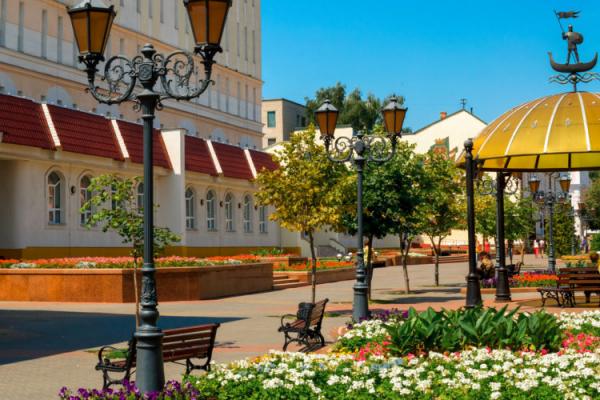 Pedestrian street in the center of Brest. More than once it was engulfed in fire, then restored. There are cafes, restaurants and shops here. It is interesting to watch the ceremony of lighting and extinguishing lanterns by a lamplighter. Separate recommendations relate to visiting the fraternal church, located at the beginning of the street. 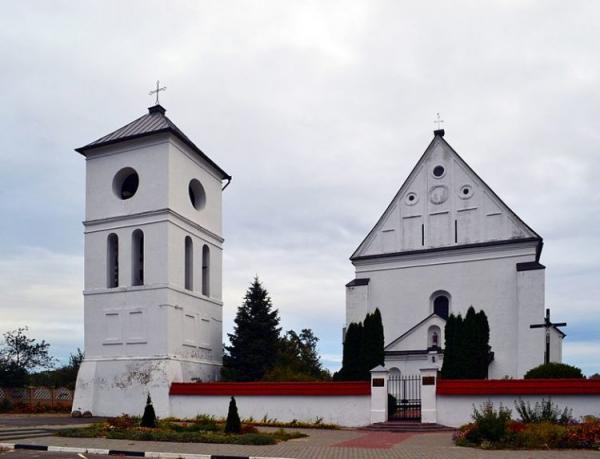 We will tell you what to visit in Brest for connoisseurs of worthy architecture. This church is a bright representative of the architectural mixture of Renaissance and Gothic styles. The temple was conceived not only as a religious, but also a defensive structure, as evidenced by narrow loopholes, massive walls and a high bell tower, which served as an excellent observation tower. The current Catholic Church. 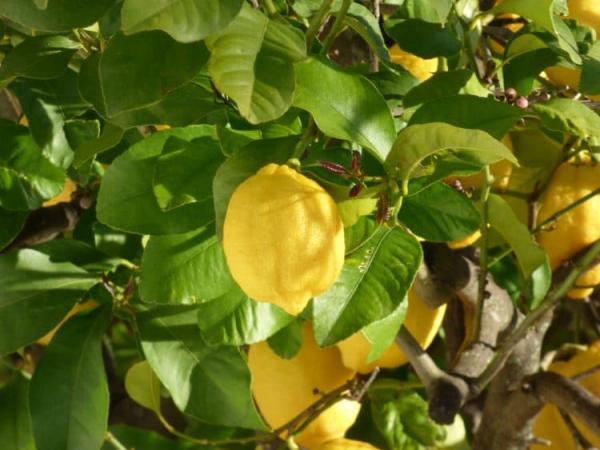 The building, crowned with a dome, combines the greenhouse and the classroom. The garden is divided into 3 climatic zones – tropics, subtropics, desert. The entrance to the greenhouse is open to everyone, the classrooms are intended for students studying the subject in practice. Due to the number of guests, hotels in Brest never remain empty. 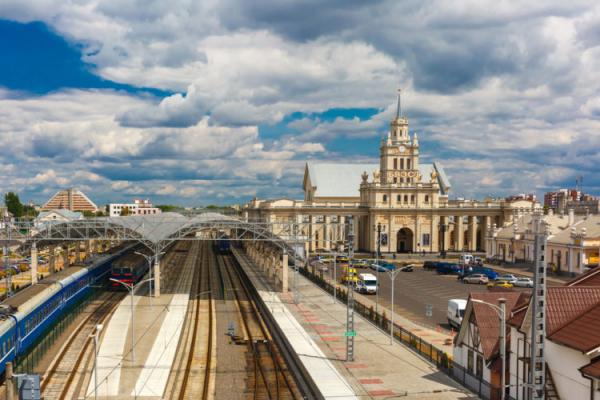 Once it was a whole castle, built in a medieval manner. Parquet floors, arches, remote from the hustle and bustle of the location tuned in a romantic way. In 1915, retreating, the Russian troops destroyed this beauty. The building was restored after 14 years, of course, with the loss of its former grandeur. Today, a comfortable atmosphere for passengers has been created here. 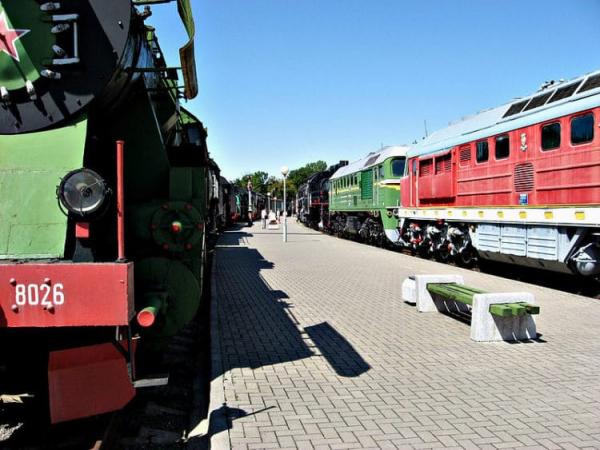 Not far from the Brest Fortress, there is an interesting collection of railway equipment. Reviews mention the possibility of access to the cabs of some steam locomotives. Despite the power of modern technology, the greatness of steam engines is truly impressive. 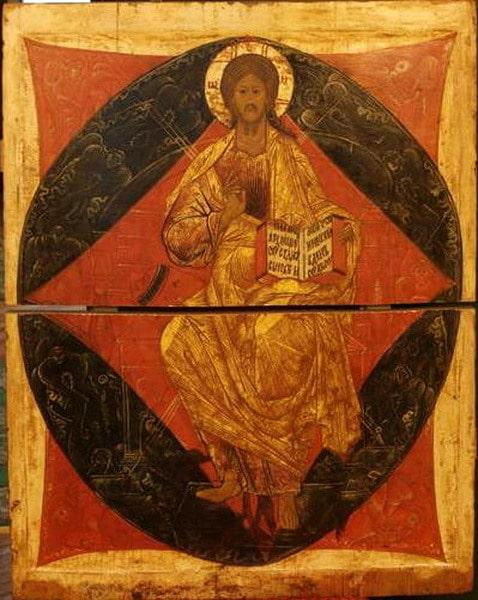 This museum is called the Brest Louvre. In addition to paintings by famous artists (Vrubel, Aivazovsky, Leger), there are talented paintings by less famous masters. In addition to the collection of paintings, the museum exhibits antique furniture. An interesting fact: all the items of the exhibition were confiscated by customs officials when they tried to illegally export them abroad, although it remains unclear how they could have tried to export contraband of this size without proper documents.

15. Museum of the History of Brest

The museum was created at the end of the last century. The main place in the reviews is given to the map of Brest depicting the chronological development of the city. Visitors are presented with 4 halls on 2 floors, each dedicated to the history of a particular period. Models of Bernardine monasteries and other archaeological finds are also interesting.

16. Church of the Exaltation of the Holy Cross 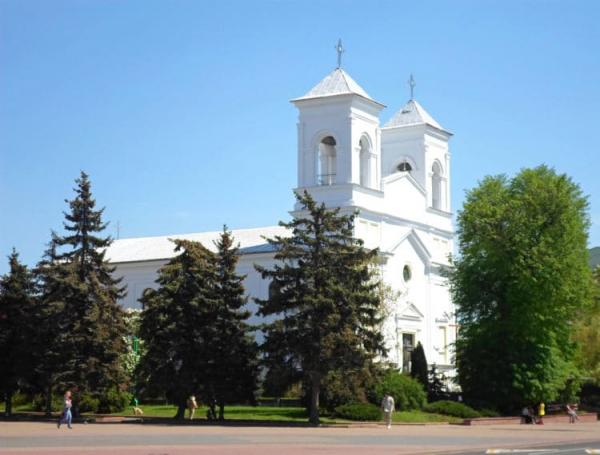 Church of the Exaltation of the Holy Cross

An architectural monument, the oldest of Brest churches. The Catholic Church is a laconic rectangular structure, rather modestly decorated. The triangular pediment with towers and a rectangular porch add austerity to the building. Many come here to venerate the shrine – the miraculous icon of the Mother of God.

Some excursions in Brest offer guests of the city to visit the exposition of this relatively young museum. Its extensive collection of 160 thousand exhibits is interesting. By the way, most of the above museums is a branch of this institution. The expositions tell about the history of the region, its natural resources. 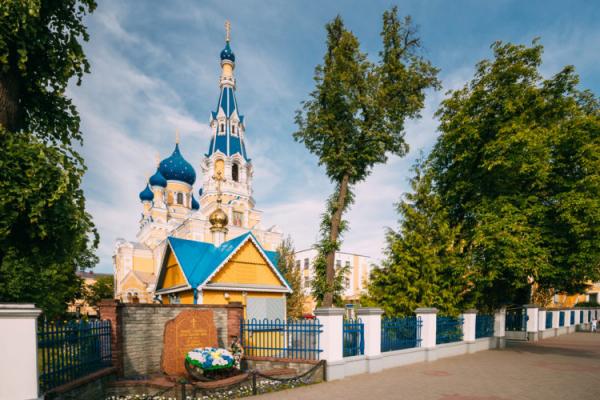 A catchy building in the Russian-Byzantine style can be seen from afar. The bright exterior design is not inferior to the interior decoration. The interior is lavishly decorated with paintings, the three-tiered iconostasis is beautifully made of wood. Believers come here to venerate the relics of the saints and part of the Tree of the Life-Giving Cross of Christ. 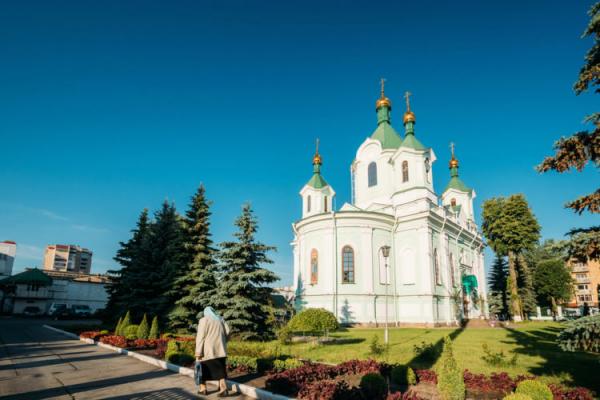 The main Orthodox church in the city with a high attendance rating, built in the second half of the 19th century. Decorated without unnecessary pomposity, in white and green tones. It contains the relics of saints. An interesting fact: 5 gilded domes were donated by the mayor of Moscow. Thanks to accent lighting, the cathedral looks especially beautiful in the evening.

This is perhaps the most majestic temple of Brest 41 m high without a cross. When entering the city, it is impossible not to notice. It consists of the upper and lower buildings, there is a bell tower separately. The interior is decorated with modern frescoes. The temple is dedicated to the 50th anniversary of the Great Victory.

Brest attractions: what else to visit in Brest?< /h2>

Not all objects here are about war. Let us briefly list the main attractions of Brest, which were not directly related to military operations and were created, rather, for the soul. 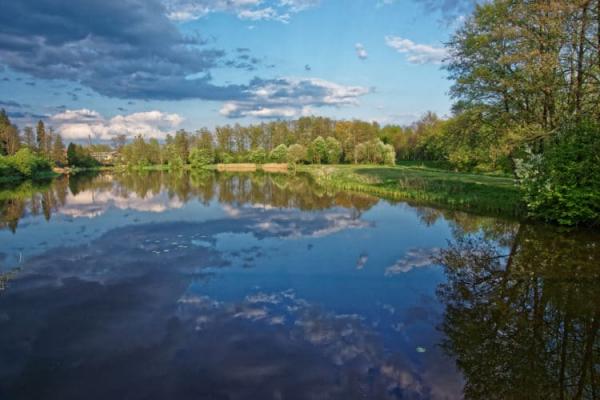 Undoubted attraction of Belarus, its pride. An independent walk will not impress much, but a guided tour will give interesting information about the history of the forest, vegetation and animals that live here in enclosures and in nature. In the museum you can see stuffed representatives of the local fauna. Only here you can enjoy the view of the relic forest, preserved untouched by civilization. 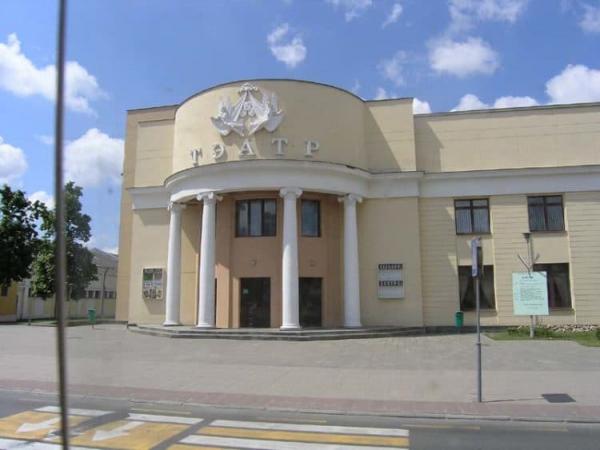 The theater, located in the city center, has its own symphony orchestra and is known for original productions of famous works. Live acting, talented directors, unhackneyed plots and a wide panorama of genres contribute to the growth of popularity. Musicians and singers often perform here. 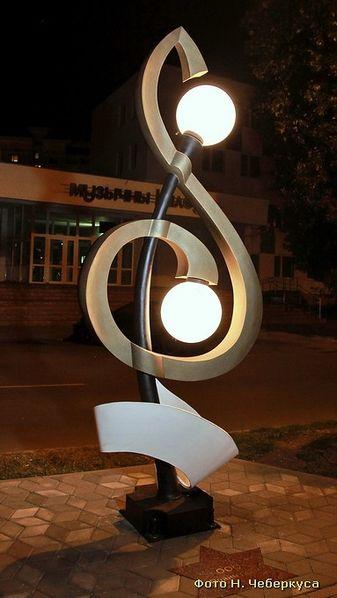 There are interesting places in Brest that have nothing to do with military history. The alley, opened in 2013, has 30 forged lanterns. Some depict heroes of famous works, others were commissioned by investors who sponsored the creation of the alley. Further replenishment of the collection with thematic objects is expected. 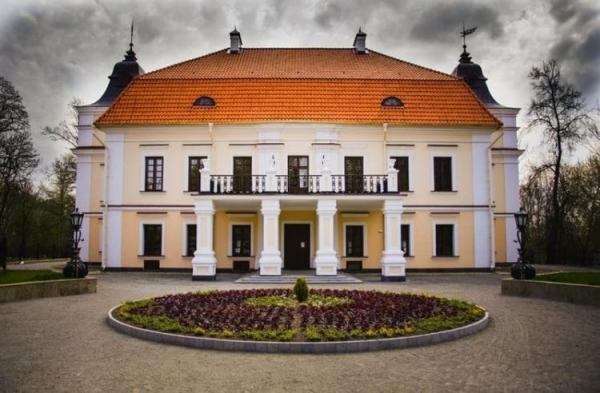 Located near Brest, in the village of Skokie. Manor of the 18th century is her attraction. Today, the exposition of the historical and memorial complex of the same name on the estate territory tells about the interesting and difficult fate of this family. This is the only ancient secular structure that can be seen in the vicinity of the city. 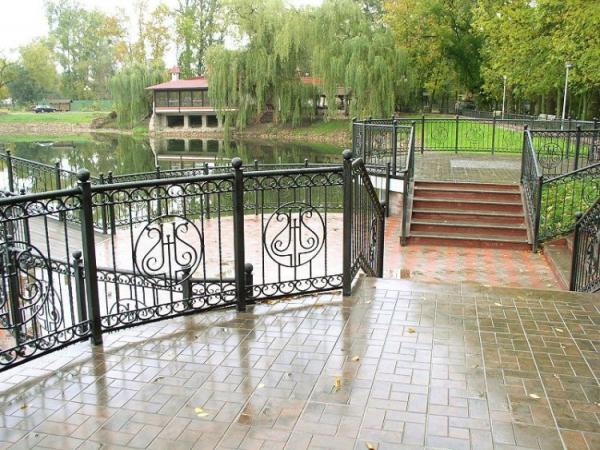 Upper Lake in the Brest Park of Culture and Leisure Yogi555

The initial area of ​​the park, opened at the beginning of the 20th century, has increased over the years from 4 to 20 hectares. This is a comfortable, well-groomed place for recreation of citizens and guests of the city with attractions, cafes, shops. There are many trees, there is a mini-zoo, you can ride a donkey or a horse.

And although Brest is not an object of tourist dreams, everyone who has been here takes with them pleasant impressions of it. Read also about the sights of Vitebsk and get inspired for your further journey through Belarus.